I wrote a couple of weeks ago about my daughter-in-law's attempt to make a dress for the two-year-old and how we were both frustrated by the slipshod construction methods specified in the Simplicity pattern.  Well, mainly it was me who was frustrated, and wondering whether good sewing technique is a thing of the past, and whether I should just relax and enjoy it.

Several readers who, like me, learned to sew in the previous century, shared my angst.  Stitchinscience wrote: "I too am surprised at modern patterns and their "quick" construction techniques.  Particularly anything to do with curves -- new stitchers really need to understand curves and bias edges."  QuiltGranma wrote: "I agree with you on the sloppy pattern directions and their way of finishing!  I've seen readymade just as sloppy.  Wear out and need repair in no time!"

Sue wrote:  "In the late 60s, I spent a couple of years in a fashion design program, learning pattern drafting, garment design and tailoring.  Recently I thought I'd take a break from art quilts and make myself some garments, but found commercial patterns so disappointing that I have decided to make my own.  If I had a daughter who was interested, I would be so happy to pass on these skills, and I can't tell you how many times my advanced garment making skills have come to my aid in making complex art out of cloth!"

A couple of readers suggested I just move on.  Helen wrote:  "Step away.  You'll only get hot and cross..."   Dixie wrote:  "I'm with Helen on this.  So much has gone the cheap and easy way.  Sewing, cooking, spelling..."

But Idaho wrote:  "Do not succumb to letting this go!  If Kristin is willing, I say teach the next generation proper garment construction with patterns having decent instructions.  Otherwise, if she continues to dabble in sewing clothes for the little one, she's just going to become frustrated, and just like in quilting, think it's her fault (as has already happened).  And you will continue to stew about this, I'm sure. "

Carol homed in on the patterns themselves:  "When I look in my stash of patterns I have saved there are VERY FEW Simplicity and most are McCalls, Vogue or from independent companies."

I told Kristin, my daughter-in-law, to read the blog post and the comments, and she in turn shared
it all on a Facebook group of people who sew, and asked "Did I choose a pattern from their half-assed line, or is it all patterns?"  Here are some of their comments:

"They're mainly half-assed.  They've always been half-assed when it's Butterick or McCalls.  I went to fashion design school and just shake my head at their instructions."

"I just want to wish you good luck.  I thought I might sew a pattern once and I opened up the envelope and my brain stopped working.  I watched YouTube videos to figure out what it all meant but decided maybe I was just too daft for it."

"I haven't had an issue but I like to search hashtags for patterns on Instagram to see other people's makes and if they have any feedback on the pattern.  I support a lot of smaller pattern makers and if you want some suggestions, I love Friday Pattern Company!"

"I hate the big 4 tissue paper patterns.  I've been sewing since the early 90s and the greatest invention ever was the independent PDF pattern companies."

"This is why I only use PDF patterns, they come with better instructions, pictures of each step and often links to videos for the really hard stuff."

"Patterns for Pirates and their sister site, Made for Mermaids have much better patterns."

These comments from a younger generations of sewists opened my eyes and made me realize that since I gave up garment sewing in the early 90s, I've missed a lot.  Such as PDF patterns (I don't even understand how these work) and getting sewing advice and directions from the internet.  Almost makes me want to make a garment again!  As to the independent pattern companies: I think in my whole lifetime I only once bought an indie pattern.  I never had problems with the big companies, and I really enjoyed looking in the pattern books, then going to the big drawers to root around and try to find the pattern in the right size.  So last-century.

Kristin hasn't raised the issue of making another dress so I don't know how she/we will proceed.  She did amaze the two-year-old the other night when said child wanted a tutu and Kristin produced one.  (No, she didn't make it -- she had gotten it as a hand-me-down from a friend but not brought it out yet.)  If the kid is going to keep putting in fashion requests, home sewing may be the best answer.  I'll keep you posted!! 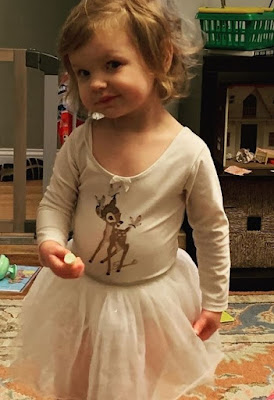 Posted by Kathleen Loomis at 8:09 PM