One day in the early 1990s I had an epiphany.  The universe spoke to me as I was sitting in my sewing room making a dress (I sewed most of my own clothes for decades; in addition to wardrobe enhancement it was my therapy, my time to be alone, my respite from a hectic 60-hour-a-week job and two trying teenagers).  The universe said to me that if I wanted to get serious about making quilts, which had been in my mind for some time, I had to devote my scarce free time to what was important -- and to do so I had better stop making garments.

So I did.  From that day on, no garment sewing other than the occasional mending or small alteration.  I didn't even finish the garments already in process, and I still sometimes come upon a half-sewed blouse or cut-out-but-not-sewed dress that was stowed away, never to be revisited.

But then came Vivian.  I never had a little girl to sew for before, and this particular little one happens to be a 2-1/2-year-old clothes horse.  But still I didn't succumb.  Her mother and the other grandma were doing a fine job of keeping the kid in fashion without my help.  Recently her mother decided it would be fun to sew clothes instead of buy them, so she enrolled in a sewing-brush-up class, and then bought some fabric and a pattern and came over to use my facilities and equipment to make Vivian a dress.

We agreed that my role would be strictly limited to giving advice and support, NOT sewing.  I cleaned off the worktable and the cutting mats so Kristin could cut out the pattern, put new thread in the bobbin, and then it was time to sew. We read the pattern to determine step one -- and I had a conniption.  Apparently a lot has changed in the world of garment sewing since the early 1990s.  Specifically, the dress had no facings!

The raw edges of the yoke were just going to sit there unfinished, as were the raw edges of the placket.  The neckline was supposed to be finished with half-inch bias tape.  The underarm seam allowance would be turned back and stitched as it merged into the armholes. 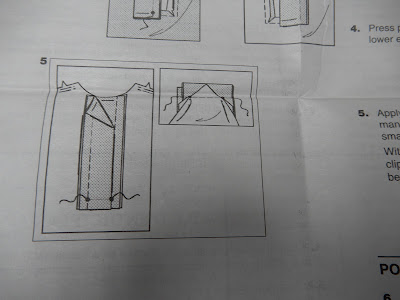 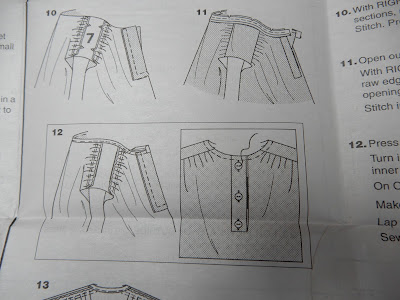 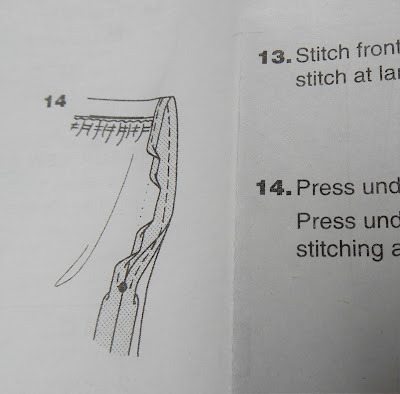 This was not up to my standards, and although I wasn't supposed to be doing any of the sewing, just offering sewing machine time, I couldn't let this project continue.  I sent Kristin home and drafted some facings for the neckline that would also cover the yoke seams, then sewed them on.  I pitched the placket (which would have required making buttonholes, which would have required finding my buttonhole foot and remembering how to use it -- too much trouble) and simply faced the slit we had already cut.

Kristin came back a couple of days ago to finish the job.  She serged the seam edges.  She followed the pattern directions to finish the armholes, and after she stitched, she said "What did I do wrong?  Look at how this is all wrinkly!!" 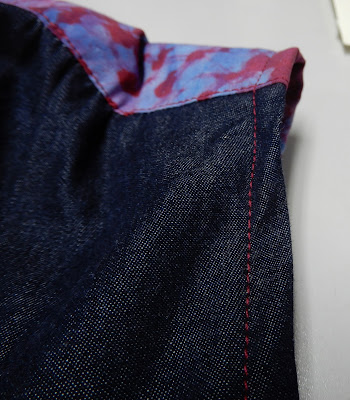 Well, no, dear, that's what happens when you try to turn back and hem a curved edge cut on the bias.  In other words, when you follow the pattern directions.  We tried to mitigate the bulge by running a second line of stitching inside the first to give a bit more stability to this fragile, unsupported edge.

I put the last touches on the dress on Sunday and here's Vivian modeling it.  It's really cute, accented with some of Kristin's hand-dyed fabric.  But it has put me into an existential crisis. 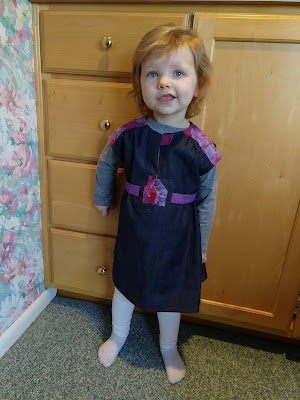 What's with these low-end, sloppy construction methods?  Why is Simplicity telling people to make garments so slapdash and flimsy?  What happens when a dress goes through the wash without any seam finishing?  I know that "unconstructed" garments are fashionable, as well as much cheaper to make, but is this the right way to go for a two-year-old's dress?  Don't mothers hand down clothes to other little girls any more?  It offends my sensibilities to think that garments get worn six times and sent to the landfill, which seems like the inevitable result of this approach.

Am I just too old and curmudgeonly?  Are well-sewed garments so twentieth-century?  If you buy Simplicity's higher-end line of patterns, instead of the cheap fast-fashion line, would you get better construction methods?  Shall I try to mentor Kristin in the traditional sewing techniques that served me so well in the past, or shall I just get with the program and embrace this brave new (sloppy) world?