Bad DIY fashion of the week


Good news!  It's Thursday, so we get another installment in the New York Times Designer D.I.Y. Series.  You will be happy to know that for the fifth week in a row, the great newspaper has maintained its quality standards in finding designers who will provide silly ideas and incomprehensible directions, guaranteed to nip readers' sewing/crafting impulses in the bud.

This week we're making a tote bag out of a linen or cotton dish towel, because "we have so many dish towels around and are always in need of reusable totes that we can also use as storage."  So says Laura Mulleavy, half of the design team Rodarte.

First we fold the dish towel in half, sew a Y-shaped pleat in the bottom to make a floor, and sew up the sides.  So far so good; the illustrations even show us how to do this, even that we should do this "so that the inside is on the outside."  When we're done sewing, they tell us to "invert the bag," which I guess means turn it right-side out.

Now comes the hard part -- handles.  We need "two costume jewelry necklaces, like the plastic beaded kind that are handed out at Mardi Gras, or one chain-link plastic necklace."  Step one: "Fold each necklace in half."


The illustration, beautifully pencil-sketched, doesn't give much guidance on how we do this, since we can't tell what's happening.  Is that one thickness of necklace or has it already been folded?  Does the half-link on the right indicate that the necklace actually extends out of the picture?  What do the arrows show?  What if you started with one necklace instead of two Mardi Gras strings?  Beats me.

Step two:  "Cut a ribbon in four pieces, each piece four inches long.  Loop each ribbon through each of the four ends in the two lengths of necklace..."

(I don't know about you, but I had to read that direction four times to figure out what was going on.  Again, the illustration didn't help, because you can't see exactly where the ribbon is going, nor can you see what happens offstage to the left after the necklace disappears from the pictures.  What has happened between picture 1 and picture 2?  And I still have no idea what to do it I started with one necklace instead of two.)

Now we stitch the ribbon loops to the top of the tote bag and we're done!!  The drawing shows only the most impressionistic idea of what it's supposed to look like, except don't you suppose a dishtowel with no reinforcement along the top edges is going to droop down past the handles instead of sticking out so crisply?  It does seem to go well with the dress and hairdo, which is pretty much what I'm wearing during quarantine.


I couldn't find any Mardi Gras beads in my stash so I couldn't test out how much weight the cord can handle without breaking, but I suspect not much.  Even without actual beads I can easily imagine how those "handles" are going to slip and slide around, and how easily the folded-in-half string of beads is going to become one tight strand stretching from loop to loop and one very long strand drooping off to the side.

I was interested in how the Times has used fashion-type illustration for four of the five articles in this series, even though this style of drawing is lousy for how-to directions.  With the right artistic style, drawings can do an excellent job of showing people how to do things -- like this example from David Coffin's great book "Shirtmaking" -- but they have to show the details clearly, not gauze them over. 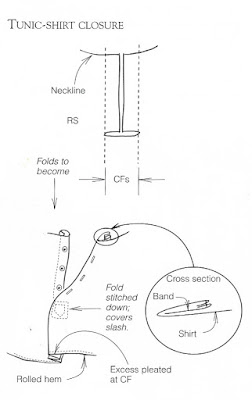 Posted by Kathleen Loomis at 12:06 PM