Thinking inside the box 1


For years and years I have been enthralled by Joseph Cornell's mysterious box assemblages.  One of my large art regrets is that two days before I was due to go to Washington DC for a big Cornell show at the Smithsonian in 2007, my father died and I figured I'd probably better go to the funeral instead.  Several years ago I made some box assemblages of my own using blank wood boxes from the craft store, but it's been my intention all along to work with used/repurposed boxes instead.

Earlier in the pandemic lockdown I pulled out a couple of old boxes that I had been collecting and worked assemblage upon them.  It has been joy to root around in my lifetime supply of stuff and junk and find just the perfect bit for this or that construction.  And pleasant surprise to occasionally be able to recall exactly where that perfect piece of junk came from! 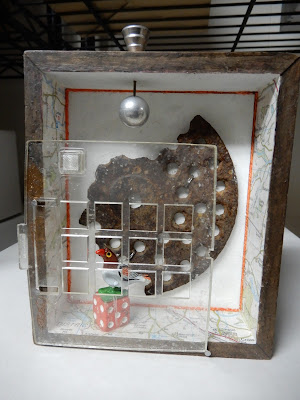 For instance, this box features a piece of transparent plastic that once protected the keypad in a pay telephone (raise hands, all those old enough to remember pay phones!!).  I found it while walking on Trevilian Way just west of Newburg Road, on the north side of the street right where the road goes into a tight S-bend.  I know the location doesn't mean anything to you, but I recite it to prove how vivid the memory, going on twenty years ago!  My first repurpose of this piece of plastic was as a resist for spraying bleach onto fabric, and because the pattern was so obviously from a telephone (at least to us old people) I titled one of the quilts "Double Talk."  Then I stopped spraying bleach onto things, but of course held onto the plastic until its second repurpose in this box. 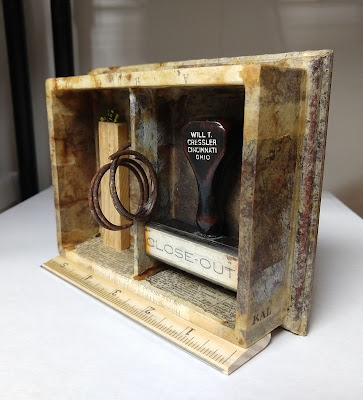 Here's another box, which I think originally held two decks of cards.  About ten years ago when I was in my teabag phase, I carefully covered the box with old printed materials behind a layer of stained teabag.

But as you can see, the box sat on a little pedestal or dais, so when displayed vertically it wouldn't stand up properly.  It took me ten years to solve that problem, by cutting up a ruler to prop up the front end of the box.  I am sorry to say that I don't remember where I got a whole bag full of old rubber stamps, which I suspect are going to show up in more boxes. 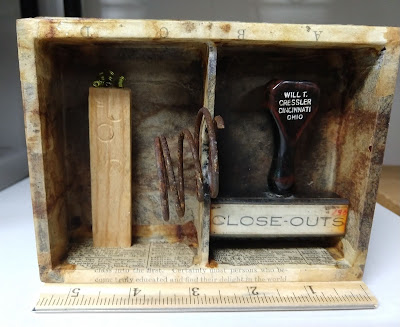 I had already started work on these boxes when I received a phone call from heaven that changed the whole course of this project.  I'll tell you more in a later post.