A few weeks ago I showed you a small piece in progress, a fabric collage made from kimono scraps and densely hand-stitched.   I got on a roll, and have now finished that one and three more in a similar vein, using scraps of old silk, linen and cotton.  I still haven't decided how to mount them for display; probably on stretched canvases, covered in either burlap or some other solid color fabric. 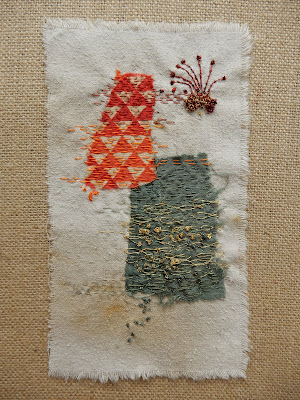 The one I showed you earlier; I added the red fireworks burst at top right because three shapes are generally better than two. 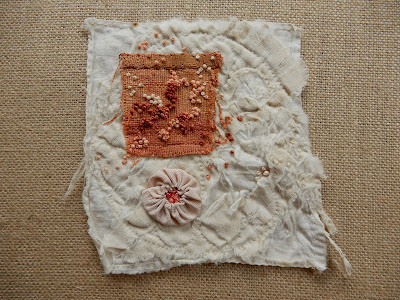 This one is stitched onto a scrap of a very old quilt, with the batting visible in some places through tears and disintegration of the cotton.  Lots of french knots, and a silk yoyo. 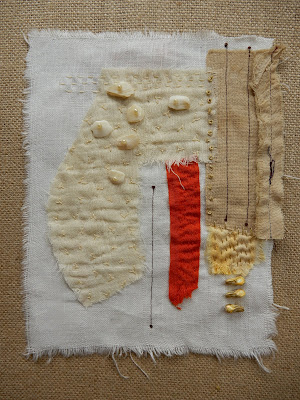 A linen support, with bits of silk and cotton.  The beige scrap at top right had a pre-existing machine-stitched seam which I echoed with three new lines of machine stitching.  I left long thread tails at each end of each line so I could make little french knot dots. 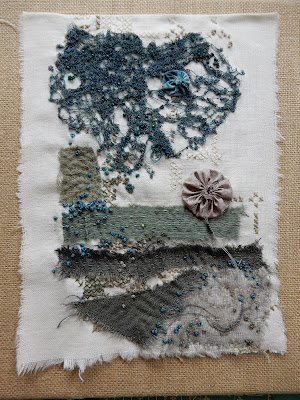 This piece has by far the most intricate, time-consuming stitching, and yet it's probably the least successful of the four.  I used a scrap of an old linen tablecloth that had been cross-stitched in tan, and put the teal blue webbing on top.  I have no idea what this stuff was supposed to be; it's made from some silky thread -- was it perhaps stitched onto a piece of Solvy to make a web? 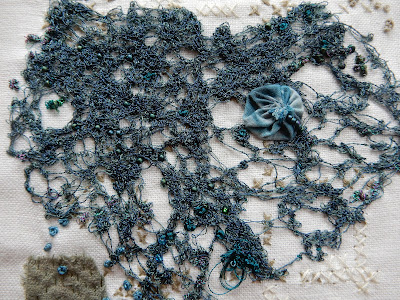 I have no idea where I got it, but it called out to me.  I sewed it down with a lot of beads and french knots, added some silk shapes at the bottom, and then decided I didn't like what I saw.  Spent many, many hours with additional stitching and some yoyos to try to salvage the piece; not sure I did.