I love the New York Times.  We've subscribed to home delivery for decades and I couldn't live without its news coverage.  Not to mention its art and music coverage and its editorial columnists and its wonderful photography and its puzzles.  So it really pains me when they drop the ball, over and over, to the extent that I have to make fun of them in this blog.

Such as this spring and summer, when the editors have been desperately reaching for ideas to help people occupy themselves during pandemic quarantine.  I loved to hate their series on Designer D.I.Y.  and so did a lot of you.  Earlier this week, when I snarked a recent NYT article on how to mend jeans with sashiko stitching, one of you commented: "The real mending is called boro."

Gail commented: "In my long experience mending jeans, it's NOT the patch that needs strengthening, it's the thinning jeans fabric around the hole.  I'm going to guess this guy "mends" his jeans not out of need, but rather to make fashiony statements.  As one whose family wore out (still does!) many pair of jeans doing real physical work, the fake wear and repairs just hits me all the wrong way.  Is this where I put in a Harumph! and Get off my lawn!?"

Our running feud with Designer D.I.Y. got passed along to Susan Lenz Dingman, an artist in South Carolina who is one of my online acquaintances from way back.  She wrote me to tell about her recent run-in with the Times' do-it-yourself obsession.  You should know that Susan has made a lot of "vessels" consisting of some cord and a bazillion machine stitches to sculpt and hold everything in place. She writes:

"Last week I received an email from a photo editor at The New York Times.  She found my fiber vessels on the Philadelphia Museum of Art Craft Show's website featuring last year's accepted artists.  She thought they were woven and would make a great DIY "basket" project for the Sunday 'At Home' print edition.  This series of articles is apparently about using actual pages of the newspaper and ordinary things found around an average household.  Her message included links to past projects, including instructions for folding a spread of the newspaper into an envelope and another for coiling strips of the newspaper into decorative paper beads.

"I knew at once that there were problems.

"First, my fiber vessels aren't woven.  I don't weave, never have.  Second, the process is rather laborious.  Third, even though I have written a free online tutorial for making my fiber vessels, the instructions can't be simplified into a neat, four or five step process.  Yet... this was an email from THE NEW YORK TIMES.  I was personally floored that anyone from such a prestigious publication would have found me.  I didn't want to write back with a simple NO.

"Immediately my husband Steve went to our local grocery store and came back with two copies of last Wednesday's edition.  Within twenty-four hours, I managed to create a fiber vessel.  I blogged about it HERE.  My response to the photo editor's message included images and a nicely phrased suggestion that my work is available should the newspaper ever want to feature work by artists who have incorporated their newspaper.  She was impressed but asked if I couldn't figure out a simple woven basket using strips of the newspaper. Politely, I declined, citing my inability in weaving as an excuse.  Yet, in the back of my mind I thought to myself, 'Susan, so you really want to have your name in The New York Times for a silly, simple DIY project that looks like an elementary school craft project?'  My answer to myself was another NO.

"I am writing today mostly to say THANK YOU!  Your blog posts confirmed my suspicious regarding this odd opportunity.  I'm glad I didn't attempt to figure out something appropriate!"

Meanwhile, at today's breakfast table my husband pointed out a NYT feature for kids, in which they're supposed to get points for doing various virtual activities with their best friend, such as writing a letter, reading a book together or watching the same movie together/apart.  They're supposed to check off when they do an activity, and keep a running total in the corner. 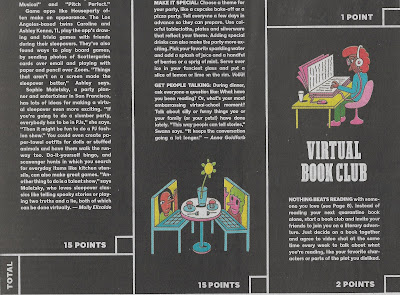 Let's hope there's a white gel pen at hand to do that checking.

Posted by Kathleen Loomis at 11:56 AM