I've had a few reader comments to the two posts I've made so far about Form, Not Function: Quilt Art at the Carnegie.  Wanted to respond to them before I go on with more discussion of the show.

About the Best in Show dress made entirely of yo-yos, Shasta wrote: "It reminds me that I have yo-yos I need to stitch together still."

After I observed that I wished the jurors had not chosen three quilts with the same basic "recipe" -- big, improvisationally pieced, white, densely machine quilted -- Irene commented: "Maybe the jurors had nothing but that type of work to select from..."

Good point, but according to the Carnegie's web page, there were 265 quilts submitted by 110 artists, so I think they could have found something different if they had tried.  By the way, that web page has photos of every quilt in the show, not just the prizewinners, so you might find it interesting to spend a few minutes on a virtual visit.

Shannon commented:  "You could conceivably add Aryana Londir's piece to this list -- the color sense is different but the piecing approach looks somewhat similar.   After reading your post today I went back and looked at the show again to see if it felt too "heavy" in that particular approach.  After consideration, I'm not sure.  The overall show feels balances to me and there are several other additional (apparently) pieced pieces that don't have this style/approach.  I wonder to what extent this is a piecing style that is currently used by a large variety of artists?  I also wondered if it might be tied to the jurors.  I remember QN 19 when Nancy Crow was a juror the selected pieces felt enriched for those that had a Nancy-Crow-piecing style.  Not that that's necessarily bad, just perhaps an influence."

Shannon makes several points worth responding to.  First, Londir's quilt is definitely of the same character as the three I discussed in my last post: improvisationally pieced, machine quilted with parallel lines, the shapes predominantly right-angled. 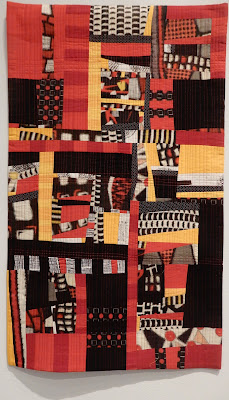 I like this quilt a lot -- how can you go wrong with the cheerful and dramatic German-flag color palette, plus just enough white to make it sparkle.  A nice balance of solids with commercial prints and what look to be discharged or dyed fabrics.

Shannon makes an excellent point about how the individual jurors and their own tastes can influence what's picked for a show.  Theoretically, having three jurors should make it more difficult for one to have a disproportionate say, but we all know that sometimes one voice is more equal than the others in the room.  I did not see the Quilt National show that Nancy Crow juried (it was QN 17, not 19) but I know that there were a lot of improvisationally pieced quilts in that show and many people suggested that Crow had mainly led the charge toward work in her own genre.  The fact that she, not the QN organizers, personally selected her two fellow jurors did nothing to dispel the faint aura of favoritism.

Longtime readers know that I am a huge fan and disciple of Nancy Crow.  I spent 16 weeks in her workshops over the years, taught at the Crow Barn, machine-quilted three pieces for her, and have credited her with turning me into a serious artist.  Probably because of her influence I love and teach improvisational piecing myself and I'm always happy to see that kind of quilt in a show.  But I confess that many times I find myself categorizing that kind of quilt as "look-mom-I-just-took-a-Nancy-Crow-workshop."

Longtime readers might recall that I was livid because QN 13 had only two quilts out of 85 that were pieced in the classic quilt format.  Now the pendulum has swung in the other direction, at least in this particular show.  This year's FNF isn't anywhere near as skewed in its selection as QN 13, and it's certainly a good show, with few if any duds and a bunch of solid, beautiful, well-made quilts.  I'll be talking more about several of them in the next few posts.  Meanwhile, thanks to Shannon, Irene and all my readers for your thoughtful comments.

PS -- Shannon has a very non-traditional quilt in the show, which I'll tell you more about.  Stay tuned!

Posted by Kathleen Loomis at 9:38 PM