There are only 19 pieces in this year's Form, Not Function show, so you can't help but notice when you seem to see the same one more than once.  Don't say to your friend, "Did you like that improvisationally pieced one, the really big one, with lots of white and all that machine quilting? It won a prize." -- because that only narrows it down to three.

Here's what won the second prize, in effect: 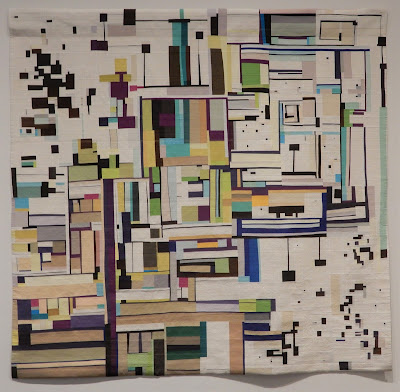 It's densely machine quilted with horizontal lines barely an eighth-inch apart.  Yes, as the title suggests, there's a hint of playfulness but the subdued palette of off-colors gives a calm feeling despite the complex piecing, especially the tiny squares of black scattered on the large white areas. 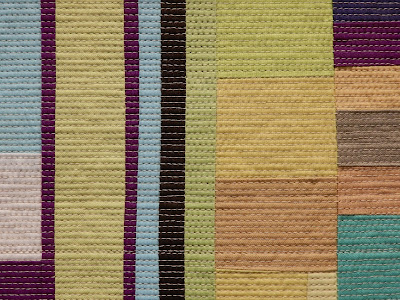 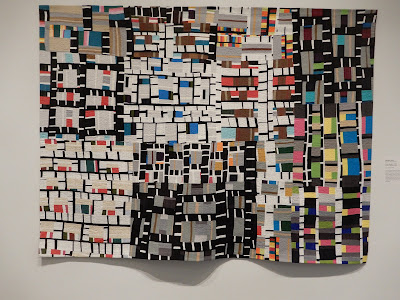 Black won a prize at last year's FNF for Curb Appeal 6, somewhat larger and more complicated than this year's entry.  (She also took best in show at Quilt National '17, before she embarked upon this series.) 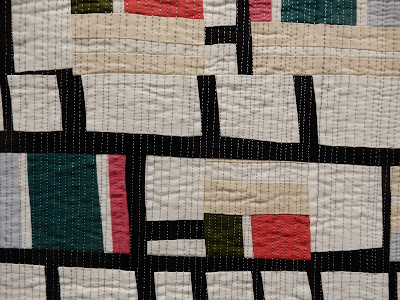 What's to say about this one -- it calls out to all of us who love to piece and cut and piece and cut and keep going forever.  Like Lapham's quilt, this one is densely machine quilted with parallel lines, except these go vertically.

And another honorable mention: 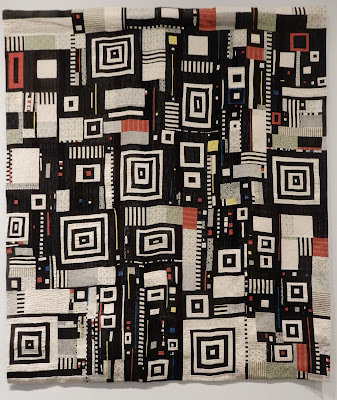 It's the tiebreaker in the machine-quilting department, making two out of three with vertical lines.  The bold black-and-white palette gives a more assertive character and graphic quality than was seen in the other two quilts, with overtones of African prints and sparing accents of red and yellow.  Unlike the other two quilts discussed today, this one mixes fabrics, with canvas, ticking and some little shiny fabrics side-by-side with quilting-weight cottons. 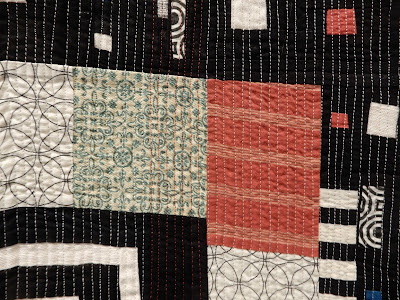 As one who does improvisational piecing with mostly right angles and dense machine quilting with parallel lines, I find it difficult to say anything bad about these quilts!  I'd be happy to have made any one of them.

All three of these quilts, especially the first two, suffered a bit from being displayed on white walls.  It was hard to tell where the quilt stopped and the wall started.  A gray or beige wall would have made them sparkle and sing.

More important, when one-sixth of the whole show consists of basically the same recipe, I have to wonder whether it might have been more interesting for viewers if the jurors had found a little more variety in approach and appearance.

Posted by Kathleen Loomis at 9:56 PM