A year of work

More than a year ago I saw photos in the newspaper of people lining up to vote in the New Hampshire primary, the first election of what was obviously going to be a big election year.  Since I am an election junkie, and absolutely love everything about voting, I had the idea to cut out the pictures and use them in a big artist book.  Soon the rules for this project became clear: I would collect every photo of people voting in 2020 that was published in either the New York Times or the Courier-Journal, the two papers that we receive every day. 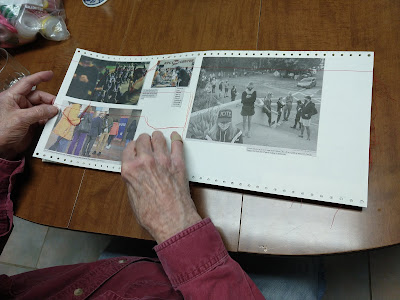 Eventually I realized that sometimes voting pictures were back-to-back on the same piece of paper, in which case I would try to choose the better photo.  Once when the NYT published a whole Sunday magazine worth of pictures of people voting and counting ballots, I was lucky to get a second copy of the magazine from a friend so I could use both sides of the pages.

Several months later I decided I better start assembling the actual book.  The pictures were piling up, and I wasn't sure how to display them.  Simply pasting them into a scrapbook seemed kind of lame -- a book, yes, but not an artist book.  And it looked like there were going to be a LOT of pictures, so how big a scrapbook to buy?  And in the midst of pandemic, I didn't even want to go to the store.

Then an inspiration.  When I retired 20 years ago I brought home with me a lot of obsolete office supplies that I knew would just be thrown out when I left.  One of these was a big stack of continuous feed printer paper (you show your age if you remember when printers had sprockets on either side to pull the paper through, and after printing you had to tear off the side strips and separate the pages).  And I decided not to use glue stick to put the pictures into the "book," but sew them in. 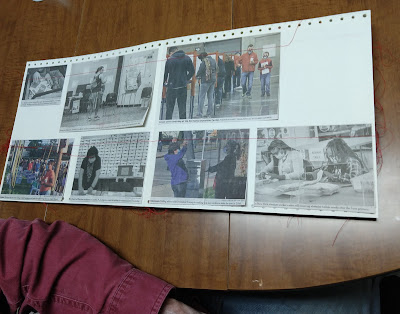 Time passed and every now and then through the summer I would spend a few hours sewing pictures into the book.  It seemed to be an appropriate activity for pandemic lockdown -- every day something new to add to the pile, no end in sight.  I fine-tuned the definition of what would go in the book a few times -- people voting, of course.  People standing in line to vote, yes.  People waving campaign signs outside the polls, no.  As pandemic made many states expand their mail voting, I expanded my definition to include people mailing ballots, people collecting ballots from mailboxes, post office trays of ballots being sorted or delivered. 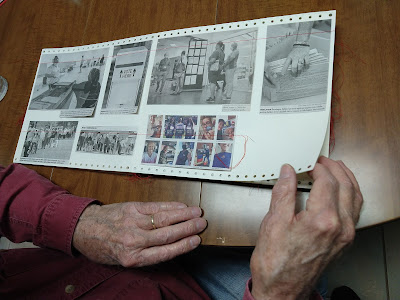 I had envisioned that the project would end on November 4 or 5, but that didn't happen -- every day were more pictures of people counting ballots.  Earlier in the year I had decided that counting ballots was fair game for the book, and there were plenty of those as November wore on.  But people protesting the ballot counting, no.  Then there were lots of photos of electors voting on December 14.

And even then, the election wasn't over!!  I debated with myself and decided that the Georgia Senate runoff elections were part of the 2020 voting, so I cut out those pictures as well.

And finally yesterday afternoon I sewed the last photo into the book!  Here my husband is looking through the book.  You can see the red thread that sews everything in, with hanging ends where I had to start and stop. 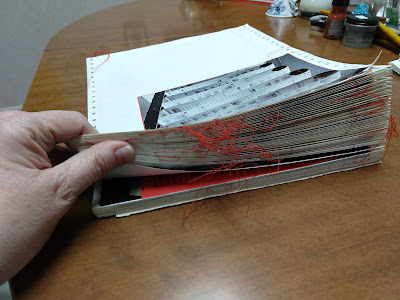 PS two hours later I found a newspaper on my pile from a couple of days ago with a photo of people voting, accompanying a story about the Supreme Court taking up a voting rights case.  Sure enough, they were voting in the 2020 election, which meant that picture should technically be in the book.  And yet my last page was so pretty, so carefully chosen -- I didn't want to make a new last page with a quite ordinary picture. Should I go back and try to find a place to sew it in, on an earlier page, or should I forget about it, since the book was already finished when I found it?  I will think about that for a while.
Posted by Kathleen Loomis at 5:40 AM