Today's baby quilts have a long history.  They were made for the grandchildren of my best friend from graduate school, Zuki, who was raised in Hawaii; her grandparents came over from Japan. Zuki's grandmother had access to the scraps from a factory where they made muu-muus and Hawaiian shirts, and over the years she sewed together hundreds and hundreds of the scraps into a single pattern which I don’t know the name of. 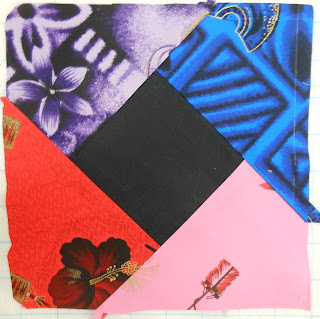 I can testify that because the outer edges of the square are all bias, the pattern is a pain to work with. You can stitch those inside straight edges in good faith but when it comes time to put the squares together any tiny deviation in cutting (and remember, these were made in the days of scissors and cardboard templates) translates into big ruffles on the perimeter.

Several years ago Zuki gave me a huge bag of these squares and I made a twin-size quilt out of them for her to give to a nephew. But I still had many, many, many squares left. In the fullness of time Zuki’s daughter got pregnant and I knew exactly what I needed to make for her – a quilt out of the muu-muu scraps. I’m sorry this photo is so dark but it does show the quilt. Since the quilt had to be done for a shower in advance of the baby, I didn’t get to put his name on it, nor did I know he was a he, so I chose a unisex color scheme. 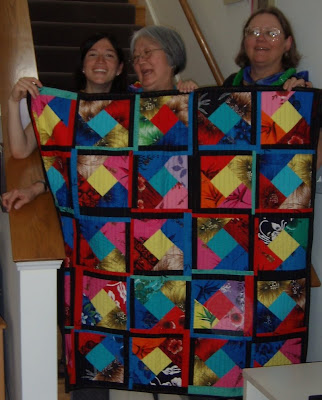 Zuki, of course, recognized the squares the minute the package was unwrapped and we both got very teary, as did the others in attendance after she told the story of the baby’s great-great-grandmother, who had started the quilt. While this was a surprise for Zuki, I had been thinking so much about this family while I worked on the quilt. I love to work with other people’s leftovers, because it gives me such a bond with some other woman who sat at her machine and sewed late at night, trying to make something beautiful. And knowing from Zuki how much hard work and hard times and sacrifice her grandmother had gone through made working with her squares doubly poignant.


When Zuki’s son had a baby a couple of months later, I waited till she was born so I could sew her name on the quilt, and searched for all the pink fabric in the stash to make it nice and girly. 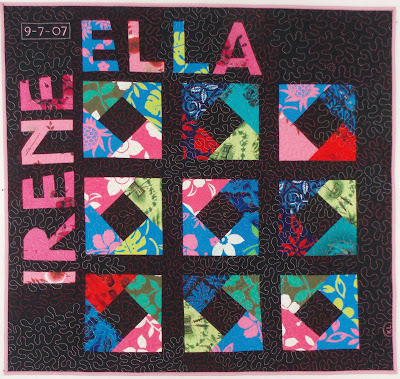 I am so jealous because Zuki now has three grandchildren and a fourth on the way. The newest baby is named Hazel, which is a great name for a quilt since it has no curvy letters. But neither she nor her cousin-to-be will get their quilts till after my Quilt National entry is in the mail this fall. And these two quilts may have proportionately less muu-muu fabric and proportionately more of something else; I’ll have to check out my stash and see what’s left.

Posted by Kathleen Loomis at 2:15 PM