Perhaps the most obsessive of my termite art techniques was the use of tiny squares of fabric sewed down in grids. The squares measure a bit less than 1/2 inch. I attached them the same way I did with selvages – by stitching through a quilt sandwich to applique the design elements at the same time I quilted the layers together.

These quilts have to be designed on graph paper beforehand, and I have to mark a grid onto the white top of my quilt sandwich so I know where to place the bits. But I have used several different techniques to actually hold them in place while I sew them down. 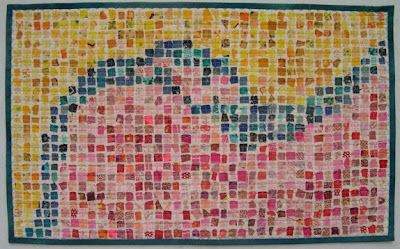 River Map 1: Falls of the Ohio

The first quilt I made in this series was experimental. I started sewing down one of the columns and placed each little bit under the needle when I got there. This turned out to be terribly time-consuming and I decided I needed a better approach. I’ve repressed the details, but in the next two smallish quilts in this series I know there was an attempt to pin the little bits in place before I stitched each column.

There was also an attempt to fuse the bits down on the quilt top before stitching. That was less than successful because I decided I didn’t want the edges of the bits to be pasted down flat on the quilt; I wanted them to be able to wave in the breeze. Had I been willing to fuse the entire square, it would have been relatively simple to execute (put Wonder Under on the entire fabric, and then cut out the half-inch bits). But because I wanted the edges free I had to cut 1/4 inch squares of Wonder Under and tack them down on the grid, then put the fabric bits on top and fuse them down.

In retrospect this was a really bad idea. Not only did it take forever, but I was amazed at how much static electricity built up just by cutting the Wonder Under into little bits and placing them on the quilt. I would painstakingly position the bits of WU, then try to lay down a silicon presser sheet – and the bits of WU would leap up to the sheet when it got within an inch of the surface! I eventually finished the project with copious applications of Static Guard to the presser sheet, and thought there had to be a better way.

My magnum opus in this series was Green Ps, which contains 8,600+ squares of fabric. This time I decided to glue down the fabric squares. After marking the grid on the white quilt top, I would pour glue into a saucer and use a toothpick to put dots on 10 or 12 of the grid points. Then I would use tweezers to put a fabric square on each grid point. Eventually, when all the squares had been glued down, I assembled the quilt sandwich and stitched everything together. 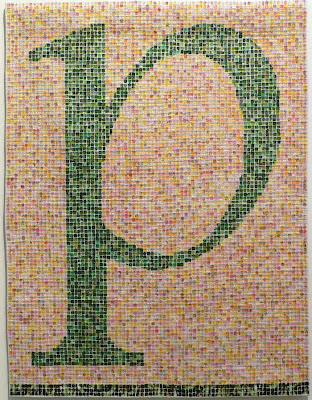 This approach worked pretty well, but it took forever. My husband was off on some expedition and I seized on the opportunity to do nothing but work. In the morning I would get up, make a cup of tea, grab a banana, go into the studio and glue bits of fabric. Didn’t have to stop to make dinner or do any other household chores, so I just glued all day.

I wasn’t impatient, I wasn’t frustrated, I just went into a lovely zen state in which nothing existed except the fabric, the graph, the toothpick, the glue and the music.

Finally about midnight I would shake myself back into this world, turn off the lights and go to bed. As I was closing up shop for the night, I would write down how far I had gotten – and realized that in 15 hours I had finished some ridiculously small portion of the whole. That part was kind of frustrating. It took more than a week of glueing 15 hours a day to get the fabric in place, and then several days more to stitch the quilt together.

With most of my quilt series, I have had the experience of liking what I did, and deciding to do it again twice as big. Obviously I made a big jump in size from the River Maps to Green Ps, and would have loved to do it again even larger. But I couldn’t figure out a way to accomplish this without spending a year on the quilt, and I have never made another one. Sure wish I could find a way to do so!

PS - maybe you wonder why the quilt is named Green Ps instead of Green P.  Lisa Strother, one of my quilting friends, knowing my love for alphabet puns, gave me a piece of fabric that was printed with lots of green peas in pods, plus leaves and tendrils.  I sliced that fabric into half-inch bits and put three rows of them at the bottom of the quilt.  So there was one green P at the top and many, many additional green peas at the bottom.

PPS - for typography aficionados, the face is Footlight.
Posted by Kathleen Loomis at 12:00 AM