Art in Antarctica -- sort of

One of the payoffs to reading your art history and paying attention at the museum is the delicious thrill you get when you suddenly find the doppelganger of the famous work of art just sitting there in real life.

Earlier this month I had a moment like that in Antarctica, of all places, when we visited Deception Island, the site of an old British whaling station and later scientific research base, which was abandoned in the late 1950s after it had the misfortune of being erupted upon by a volcano, not once but three times.

The beach at Deception Island, inside the caldera of the volcano, is dominated by the remains of many rusty tanks, once used to store whale oil but now falling apart.  The instant I saw them I thought "Richard Serra!"

Serra, one of the great minimalist sculptors, first became famous when his vast work "Tilted Arc" was installed in Federal Plaza in New York City in 1981.  The piece, made of Cor-Ten steel, which rusts beautifully, was 120 feet long and 12 feet high.  Many people thought it was magnificent, but the philistines yelled loudest.  It was too expensive, and it was ugly, and people put graffiti on it, and worst of all, you had to walk a few steps out of your way to get around the arc and enter the federal building.  Although twice as many people testified at the eventual public hearing that they liked it, compared to those who hated it, the bureaucrats in charge voted to dismantle the sculpture in 1989. 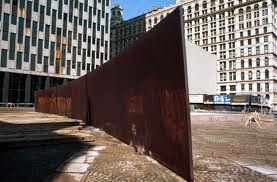 Serra still loves Cor-Ten steel, and in this decade he has extended his arc concept to make huge, room-sized spirals and enclosures of rusty steel.  I saw a lovely one at the Los Angeles Museum of Contemporary Art last year. 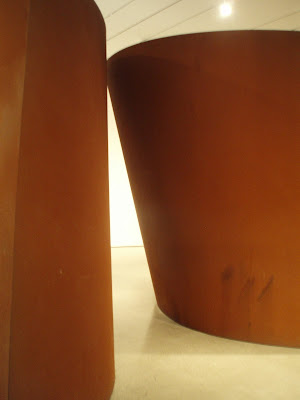 So imagine my surprise to find the psychic twins of these great works of art on the deserted beach of an island at the far end of the world. 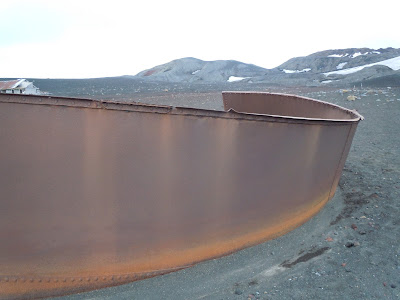 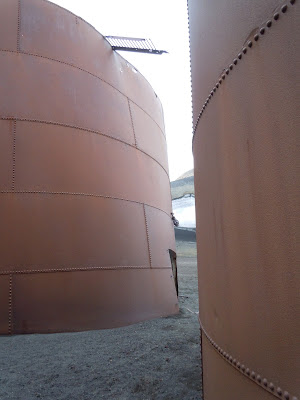 Posted by Kathleen Loomis at 7:19 AM