Still fitting it together

Had to take a week-long hiatus for out-of-town company, the Cincinnati quilt show and helping Zoe finish her rail fence quilt, but in between I got my hot pink and orange quilt almost fit together.  On April 9 it was in three large pieces, with a ragged edge that had to be filled in and squared off. 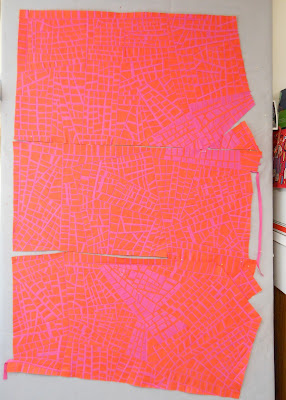 Once you get to this point the process goes into slo-mo, mainly because it's more work to wrestle with big pieces than with small.  And it's fussy work to get those last bits to fit together.

It would be simpler if I would just sew all the pieces together and slice off a neat straight edge along the right-hand side, but I don't work that way.  One reason is that I'm so miserly of both fabric and time that I refuse to cut away pieced sections that I have worked so hard to produce.

And if I were to slice the edge off, the cut would go through many of the pieced areas at an awkward angle, leaving many pieces in shapes that I wouldn't like.  No matter how off-kilter and random the center of a quilt is, I like the edges to be more regular.  That looks better, I think, and makes it easier to turn back the facings if no lumpy intersections clog up the edges.

I've never kept records accurate enough to tell how long it takes for the fiddly end-stage of complicated piecing, but my guess is that it's a variant of the famous 80/20 rule:  the first 80% of the quilt takes as long as the last 20%.  The excitement and freedom of the start of the project, when I could just sew madly away, making modules of whatever size and shape and sewing them together at odd angles, have long since dissipated.  It's work at this stage, and sometimes I get up from the sewing machine realizing that it's taken me all day to make very little progress.  But I still love the colors, and each time I get another large piece sewed on I'm happy with the way it looks.  It just takes too long in between those moments! 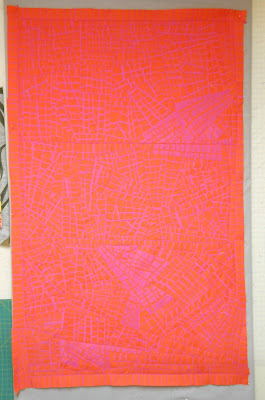 So here's the quilt, as of midnight yesterday -- in one piece at last, with the edges squared off, ready to quilt.  As you can see from the width of the design wall panel, it's about 46 inches wide (note how much width had to be added, compared to the earlier photo, to make everything come out straight) and maybe 70 inches tall?

Still to be determined:  Will this be a quilt or just half of one?  I bought some new fabric last week that plays well together with the orange and pink, so maybe they'll become a diptych.  I'll keep you posted.

Posted by Kathleen Loomis at 8:35 AM