I've written before about my love of sew-off squares, those little bits of fabric that serve an important function in piecing and quilting, preventing loose thread ends from complicating your sewing machine process.  Instead of cutting the threads when you get to the end of a seam, you sew onto the little square, then cut the thread between the work and the sew-off.  Your needle never comes unthreaded, you avoid long thread ends around the edges of your work that might get caught in subsequent seams, and you use a lot less thread.

No sooner had I discovered the functional benefits of sew-off squares than I decided they could have artistic benefits as well.  I like to make little designs on the squares, then collect thousands of them and sew them into large compositions.  But I almost always have the squares separated by a threadwork grid.  For some time I have been thinking that the squares would also look good if they were placed much closer together, almost covering the background.

I had a chance to experiment with this concept last week when I made a small stretched piece for a community art project.  My local fiber and textile art group is making work to hang in our regional drug and alcohol rehab clinic, and I had signed up to do a piece.  We each received an 11x14 stretched canvas, and had to perform some kind of textile art on it. 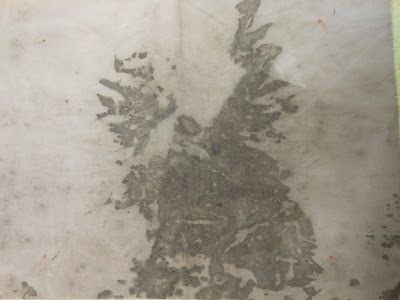 I started with a piece of fabric dyed with black walnuts, a project that I worked on last fall.  It was the perfect size to wrap around the canvas.  Then I chose some sew-off squares out of my collection that seemed to share a character or sensibility. 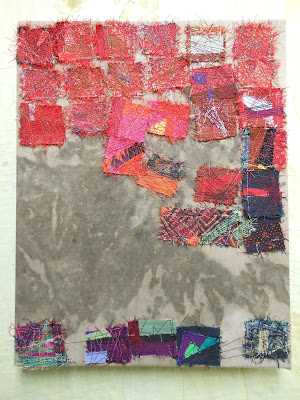 They're all kind of rough -- not carefully composed, not evenly stitched.  They seem to have been sewed together like mending or surgery rather than like embroidery.  I thought that was a good metaphor for people in rehab, trying to put together the bits and pieces of a life that has been going through hard times. 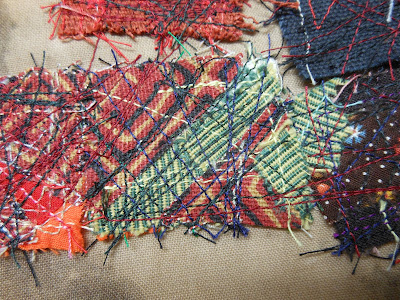 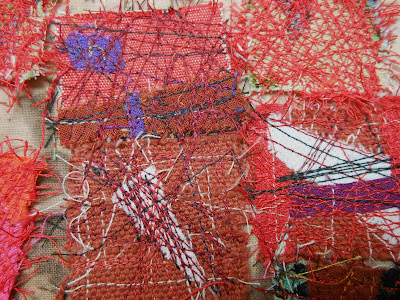 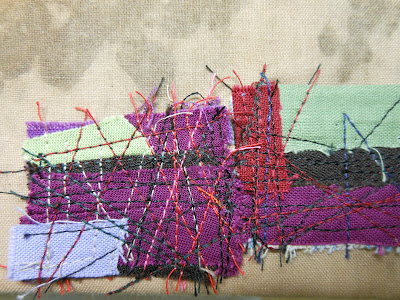 I know that in my own hard times I have found comfort in sewing together a bazillion tiny bits of fabric, proxies for the messy bits of life that had gotten out of control.  I hoped that the people at the clinic might find a similar comfort in looking at these patched-together squares.

I machine-stitched the squares to the base fabric first, then stapled the fabric to the frame for a neat finish. 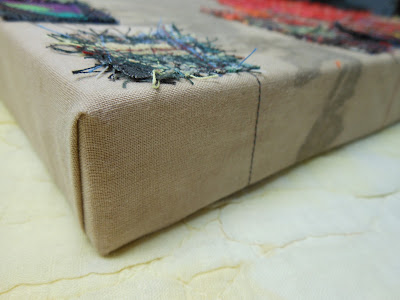 To see what other fiber artists have been up to this week, click here to visit Nina-Marie's Off the Wall Friday blog.

Posted by Kathleen Loomis at 9:19 AM