In management training courses they tell you to always preface your criticisms or suggestions with some praise.  "Jack, you designed a really beautiful building!  Too bad the roof leaks and you forgot to put in electrical outlets...."

So here's my praise.  I think Quilt National is the best venue in the world for non-traditional quilters who want their work to be seen more as art than as decor.  The show is beautifully presented, the catalog is first-rate, the two-year tour allows the work to be seen in many other cities, it attracts the best quilters in the world.

And I think it's good that QN has gone to online entries this year.  It hasn't been all that long since they switched from slides to digital, and now they've bypassed the CD, which was cumbersome at both ends of the entry process.  I remember how long it took for many art venues to abandon slides a decade ago, and the creative excuses they put forth for clinging to obsolete technology.  At least the shows that I typically enter, including QN, have been a lot more reasonable about going online.

(You knew that was coming.)

I got a bit crabby after going through my online entry process for Quilt National last week.  Fortunately I had been warned by some of my fellow artists that the process was lengthy, so I prepared myself with a fresh cup of tea and a whole morning with no other commitments.  But even in that frame of mind I found the task to be unnecessarily arduous. 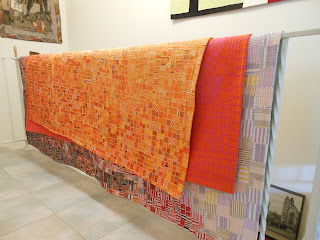 I've used several different online entry systems for various shows, and encountered some glitches, but they seem to be improving.   Obviously there's more than one choice out there for a show to choose from.  So I'm not as tolerant of the glitches as I was a few years ago when people were inventing these systems on the fly.

The directions were clear about how the images were to be sized and named, so that was fine.  Having done online entries before I know to have all the images in a single folder, to have the dimensions and correct titles written down, to have my credit card at hand.

So I proceeded to "click here to register and upload."  Typed in my name and other info, got the message that I had been successful in registering, and attempted to move on and upload.  No, I had to wait for an email confirmation.  That came several minutes later, after I checked my junk mail folder (no, not there) and asked for the system to resend.  I clicked on the link in the email "to activate your account."  That took me back to the site, but with a "sorry, you lose" message that my account still hadn't been activated.  After two or three times I realized I should try copying and pasting the link instead of just clicking, so finally I was in.

Then I had to provide a bunch of information on the work itself -- a series of multiple choice questions to describe the materials, processes and nature of the quilt.  Then more questions to see if I would be eligible for various awards: the surface design award, if I had dyed, painted or otherwise created the image on my quilt; a special award if I lived in Ohio or one of its bordering states; a young artist award, if I were under 30.  Then whether I had entered QN before, and whether the quilt had been out in public, in the flesh or on the web.

One of the questions asked me to "Describe the embellishment on the face of the quilt: paint, machine or hand enbroidery, dye, beads, found objects or other."  Since I had no embellishment, I left the question blank.  But the computer caught me and made me answer.  I settled on "other" and wrote in "none."  (Thought maybe they could have provided "none" as a possible answer -- aren't there lots of quilts out there with no embellishment? -- but that would have been too easy.)

This didn't take all that long to slog through, so I was soon at the last step: the credit card page.

QN has a new pricing policy this year: instead of $35 for up to three quilts, it costs $35 to enter one quilt, and $5 each if you want to enter one or two more.  But the three charges had to be rung up separately.  After I finished all the paperwork for Quilt #1, I had to pay $35.  I typed in all my credit card info: number, address, verification code, expiration date, you know the drill.  And I was done!

With Quilt #1, that is.  Now I returned to the top of the page and went through the same routine with Quilt #2.  Typed in the dimensions, etc. of the quilt twice, once for the full view and once for the detail shot.  Told them that I still live in one of the bordering states and I'm still not under 30.  (Wonder how many people were under 30 when they started, not when they finished... )  Typed in my credit card number, verification code, expiration date, etc. to pay another $5.

Now I did the whole thing all over again for Quilt #3.  I wish I had kept track of how many times I typed in my name, my address, my phone number.  Several.  At least the process was fairly clear, if vastly longer and more cumbersome than it had to be.

Whenever I encounter busy-work extravaganzas like this entry process, I wonder about how the decision was made to use that particular format.  Did anybody sit down and pretend to be an entrant, typing in everything that was asked for?  Did that person notice how many times she had to type in her name and address?  Did she say "can we consolidate some of this information to make it easier for the people?"  Did she say "it's been years since Amazon invented the shopping cart -- why can't we run through just one charge for whatever you owe?"  And if not, why not?

Quilt National, being the 800-pound gorilla, can get away with this kind of red tape.  I guess.  But why would it want to?