The challenge of challenges 3

I don't have good photographs to illustrate my very early experience with challenges and theme shows, but many of them were big helps to my artistic progress.  For instance, a challenge was my first entree into having my work displayed in public.  At the time (early 1990s) I had just discovered quilt shows and learned that you generally had to have photographs made for jurying.  This was more than I could cope with, but when my local fabric store decided to sponsor a fabric challenge with our local quilt show, I was delighted to realize that I didn't have to submit photos, just bring the quilt to the store at the appointed time.

You would buy a half yard of the theme fabric and it had to constitute at least 50% of the face of the finished quilt.  The first year I participated I won a judge's choice award (the prize: $0 and a cute little certificate, which I framed and hung in the bathroom for some years until its next paint job).  The third year, my quilt was really fine -- it still hangs in my living room.  (Some day I should resew the sleeve so the top edge isn't wavy.) 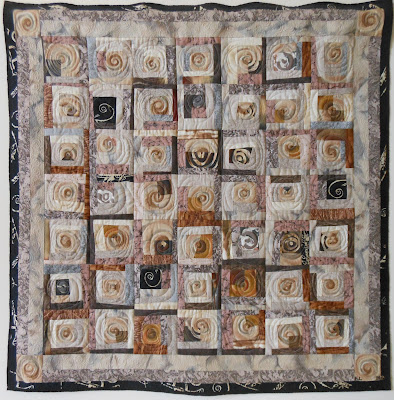 I also participated in several challenges on the Quiltart list, which was one of the first and most vibrant of the online communities for quilts as art.  Our shows were virtual (which made me learn how to con my children into taking digital photos for me, since I didn't have a digital camera at the time).

This challenge was to illustrate an aphorism from Ben Franklin.  I like the quilt, but it was truly one-off.  It's one of only two or three representational quilts I've ever made, and the only element that has any relationship to anything else I've ever done was the use of words printed from my collection of antique wood type.  The cow came from a cheater cloth but Tim was entirely my own design; since I can't draw I was particularly proud of how he came out.  The cow's ear and tail are three-dimensional. 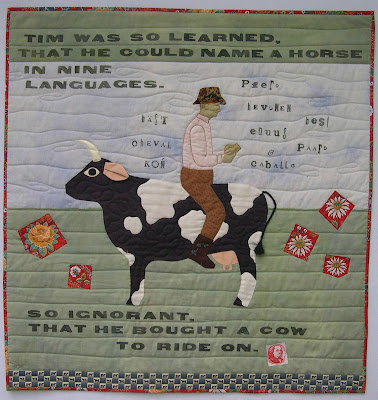 The quilt reads:  Tim was so learned, that he could name a horse in nine languages.  So ignorant, that he bought a cow to ride on.

Here's another one from the Quiltart list.  The challenge was to use only pink, black and white.  (I even dispensed with the white.)  I had been wanting to make a quilt with narrow pieced stripes, and when the challenge was announced I decided I might as well make it in pink and black instead of any two other colors.  The quilt subsequently was shown in an exhibit at a brick-and-mortar museum and won a prize. 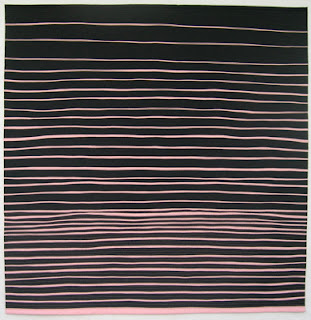 
You may notice a new twist in my description of how this last quilt came to be: for the first time, I responded to a challenge with something that was already on my to-do list.  I was beginning to decide that in a challenge, I shouldn't stray too far from my preexisting body of work.  I think that was a critical step in my journey as an artist, and I'll write more about that next week.


Update: I've linked this post to Nina-Marie Sayre's blog -- visit her to see what other fiber artists are up to this week.