The challenge of challenges 5

After I realized how I had used challenges as a crutch for many years, I soured on them.  The dog would still salivate when the bell was rung, but I was able to restrain it from biting.  I knew that challenges would be the quilting equivalent of daily sudoku -- fun, intellectually stimulating, but in the end, irrelevant to the art I felt I should be making, my "real" art.

I made a rule: I would respond to a challenge or a theme show only if I could make work that was already on my to-do list.  In other words, it would have to be a natural extension of an existing body of work, and explore something that I hadn't already explored, or that I wanted to explore further.

The first occasion I had to live by my new rule came in 2008.  My small quilt group had a show that was going to be called "At the River's Edge" and I couldn't think of anything I'd made that would fit the theme.  My most recent work included this piece: 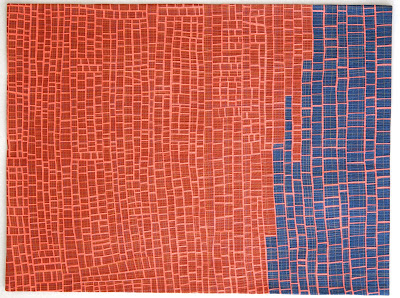 One day as I was whining to the group how I had no river quilts, no ideas, and precious little time before the show, somebody joked that if I was really desperate I could flip the quilt 90 degrees and call the blue a river.

Well!  Maybe not a joke after all!

I did flip the quilt and named it Low Water.  I recalled that the red-brown area of the quilt had been suggesting parched, cracked, dried-up dirt all along and it wasn't a stretch to think of the blue as water. 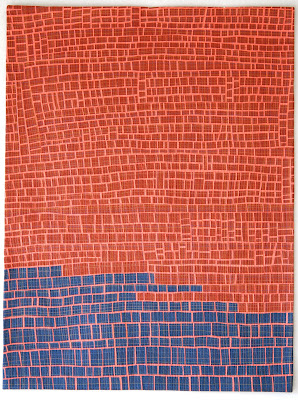 That immediately prompted a companion piece, which I named Flood Stage.  Here the river is almost escaping its bounds, lapping enthusiastically against the bricks.  I knew exactly how I wanted to make this quilt, because I had already resolved that in the future I wanted to use different colors of similar value, and try using small print fabrics as my fine lines (to date, I had only used solids). 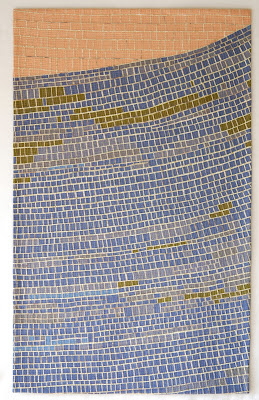 I loved both quilts, and was pleased that the theme show made them happen.  And I felt so happy that I hadn't spent months making quilts that didn't fit into my current series.