I've written before about the book I'm trying to finish up, and that was at the top of my priority list now that we're back home.  I had to make one last quilt because I needed to document the process of squaring up and trimming a piece, especially if your quilt is larger than your cutting mat.  As long as I was making one more piece, decided I should free-motion quilt it, since most of the other pieces in the book had been quilted with straight lines and a walking foot.

Then I decided to get fancy and quilt each rail of my rail fence blocks with a different pattern, changing the thread color with the color of the rail. 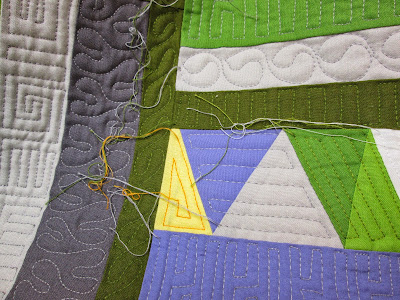 That was no big deal -- except that I was left with almost 400 pairs of thread ends to bury once the quilting was finished.  That's the secret plus of straight-line grid quilting -- all the thread ends are at the edges of the quilt, ready to be concealed in your binding or facing.

So I turned on the TV and watched four shows that I had taped while we were away, sinking thread ends all the while.  I have made a dent in the quilt but there are still a few hours of mindless tedium ahead before I can get on with the squaring up and trimming.

I can't say that finishing is my favorite part of quiltmaking, but there's a certain zen of working without thinking that is calming and satisfying.  And it's so nice to shift your focus every now and then, when it's time to reposition the work, and notice how you're indeed making progress!