Cinderella finally makes it to the ball


Last summer -- that is, the summer of 2012 -- I bade the world goodbye, descended into my studio for a couple of months and made three quilts to enter in Quilt National.  Two were pretty good, and one I thought was spectacular. The QN jurors did not agree.  I thought they were nuts.  But I knew I had three nice virgin quilts that would some day find their way to the big time.

Several months went by and I entered the best of the bunch in Form, Not Function: Quilt Art at the Carnegie.  That's my hometown show; in fact, I had been one of a group of people who helped get that show started, and for several years helped with the jurying and hanging of that show.  After I stepped back from hands-on involvement I decided to let some years pass before actually entering a piece to avoid the appearance of conflict of interest.  But it seemed as though enough time had gone by, and I had this beautiful quilt that really wanted to go out in public.

A few days after I did my entry and sent in my money, the director of the Carnegie called me up with an offer I couldn't refuse.  They were doing a special catalog to mark the tenth outing of Form Not Function, and asked me to write an essay about how the show began and has progressed.  We decided that under the circumstances, it would be better if I didn't have an entry in the show, so I got my $30 back and wrote the piece for the catalog.

Doing the essay was great but my beautiful quilt was still stuck at home, draped over the stair railing. I knew it would get its day, but that didn't seem to be any time soon.  I didn't want to spoil its debut by putting it in a second-rate show -- no State Fair, no local guild exhibit.  This quilt was better than most and deserved an appropriate venue.

A few regional shows came along that I thought might be good enough for my baby, but there were size limitations, and all three of the "Quilt National quilts" were too big.  Finally I found a show that was super-prestigious -- sponsored by the Surface Design Association, and with my idol Joan Schulze as one of the jurors -- with no pesky restrictions to keep us out. 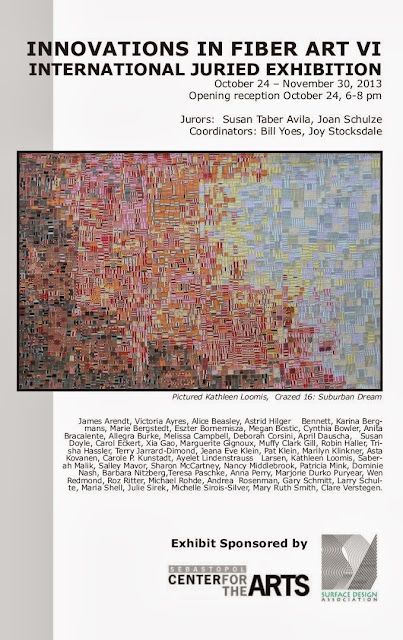 I am delighted to report that the quilt got in, and that it's the poster child for the show.  Innovations in Fiber Art VI, opens tonight at the Sebastopol Center for the Arts, in Sebastopol CA.  I won't be there; it's just too far and too expensive to make the 12-hour trek so soon after returning from a western trip.  But my beautiful baby will!  I knew that if we were patient, some day we would be rewarded.