You might think that after somebody has entered 100 shows or so, it wouldn't be such a big deal.  But yet again, it's entry time and I'm struggling.

This time it's for Fiberart International, a very prestigious show that comes around every three years and attracts artists from all over the world.  I was fortunate to be juried into the show once before, in 2010.  The next one, in 2013, unfortunately had the same entry deadline, give or take a week or two, as Quilt National, and the three quilts I had so tediously finished for QN constituted my entire artistic output for the year.  So I had nothing to enter in Fiberart International that year.

So this time I was determined to have an entry, and it is centered around the knots I've been tying for several months.  The entry deadline is midnight tonight. I finished the last piece on Friday and this weekend did the photography -- that shouldn't be too hard when the art is only a few inches tall, should it?  No struggling with big design walls or wrestling huge quilts into position.

But too small can be just as challenging as too large!  My point-and-shoot camera, usually utterly reliable for extreme closeups, refused to focus itself on the knots for detail shots.  Here's what my beautiful sculptures were looking like in the photos: a blur. 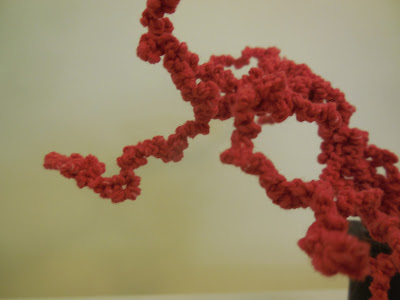 Fortunately I have a good friend who saved my life by using his much nicer camera to shoot gorgeous photos this afternoon.

Now the last hurdle: what to call these pieces.  The first ones that I made were called "Specimen", a name I liked because it was indeterminate as to the nature of the things depicted.  Are they animal, vegetable or mineral?  I'm not sure, and the name left it ambiguous.

So the obvious name for the series I'm entering in Fiberart International, in which the knotted bodies are emanating from old wooden spools, would be "Spool Specimens."  Oops.  Too close to disastrous connotations.