The traditional rail fence block consists of three or four parts -- call them strips, stripes, rails, whatever you like -- that make up a block.  Usually there's relatively high contrast between the colors of the rails.  Traditionally, when the quilt is assembled, every other block is given a quarter turn to make an overall checkerboard or weave structure.

Sometimes one of the rails is given a dominant color allowing you to deploy the blocks in patterns.  If one of the side rails steps forward because of high value contrast, you can get a zigzag pattern across the quilt.  Or, by arranging the blocks differently, you can get pinwheels.

If the middle rail steps forward because of value contrast, you'll get a different effect -- and over-and-under basketweave pattern. 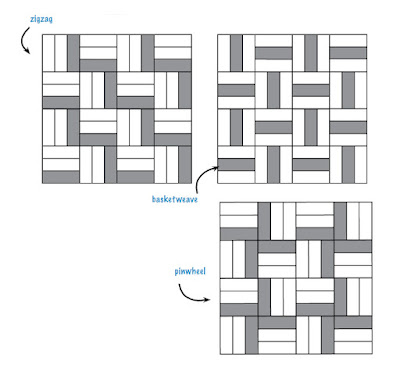 As you can see from this brief excerpt, there are lots of design variations possible just using the traditional rail fence layout.  But this is just the start; next we're going to start changing the rails, the blocks and the way the blocks are assembled.

To buy the book, click on the thumbnail picture in the sidebar at right, or HERE.
Posted by Kathleen Loomis at 5:55 AM