Ten years ago I took a workshop from Nancy Crow in which we were supposed to make a vertical composition 4 feet by 8 feet in black and white, contrasting areas of small, complicated piecing with areas of larger, more serene expanses.  I begged permission to make mine horizontally instead of vertically, as I have problems on ladders, and came up with the idea of a semicircle, which of course would fit perfectly into a 1x2 area. 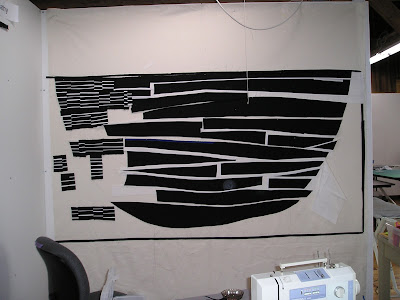 I liked my black and white composition but never got it completed in the two days allotted, let alone sewed together.

Then we were supposed to replicate the composition but add neutral colors to the B&W.  I got this far in the workshop and never returned to either of the pieces when I got home.  My design walls at home are nowhere near as expansive as at the Crow Barn, and I got distracted by finishing up my alphabet series for a solo show later that year. 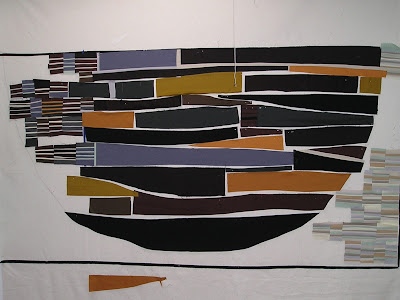 (Brown Planet, still pinned to its design wall backing from the Barn,  subsequently got passed along to my internet pal Norma Schlager, who finished it and entered it in Houston, where it won a prize.)

When I returned to the Crow Barn the following year I also returned to the exploding planet motif.  My first try was a disappointment.  I had wanted to get it sewed together, in contrast to the two previous Planets, and didn't take enough time. I liked the colors but thought the composition was too crude and didn't like the way the circle was cropped at the right. 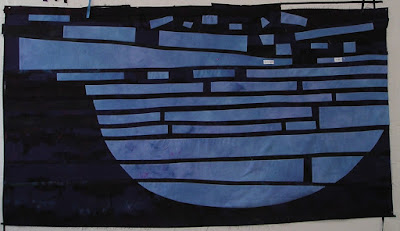 I took that one down and started a second one. 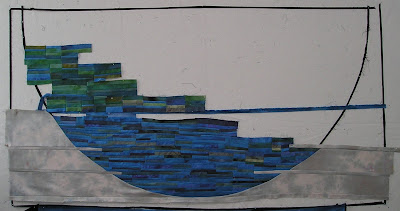 This one I worked on at home and finally finished in 2011.  I wasn't thrilled with the composition (probably should have stopped piecing four inches down) but it was a workmanlike effort and I thought it might just be appropriate for some second-tier show. 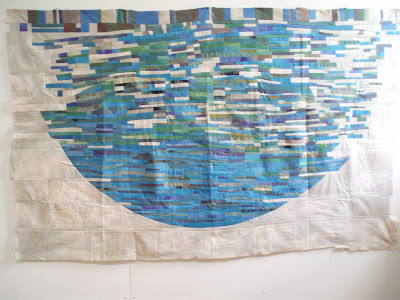 The bigger problem was that it didn't match any of my other work.  Right after I began the two blue planets, I started working with my fine lines technique, which has occupied me for the last eight years.  As the fine line series progressed, I became more and more reluctant to show work that was not related, especially since I had no immediate plans to continue with the exploding semicircle motif.  So Blue Planet sat on the bed for years all by its lonesome.

When my fiber art group took on its community service project to provide art for our local Child Advocacy Center, I thought maybe Blue Planet had found its destiny.  And here it is, in the lobby at the reception last night. 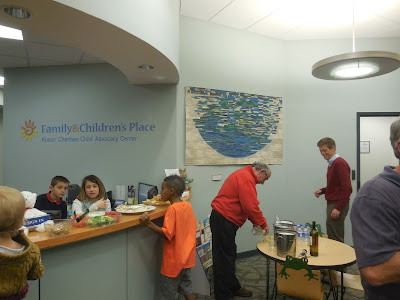 It's hard to see in this photo, but there's a bend in the wall and the quilt fits perfectly on that panel with about three inches on each side.

Several people asked me if I had made the quilt for the space.  I said no, but maybe that was the wrong answer.