I am one pissed-off artist as I write this post.  I just spent a half hour attempting to enter a juried show using the CaFE system, which I have used before but will never use again if I can help it.

CaFE is one of those "helpful" systems that wants to make life oh so easy for you but ends up making it nearly impossible to accomplish what you want to do.  Like autocorrect and autofill, which so frequently refuse to accept the word you type in and substitute something else, CaFE thinks it knows what you want to do, and damn if it will let you override its plan.

Theoretically the helpful system should have been a breeze, because I was going to enter the same things that I had put in a previous show.  There they were in "My Portfolio" and when I checked the two images, they popped themselves up into place.  Or I guess they did -- I had been asked some questions about "Entry 1" and "Entry 2," but I could never figure out which of the two pieces got dubbed 1 and which got dubbed 2.

After I had entered the previous show I had second thoughts about the price I had put on the works, and now decided I'd better go back and see if I wanted to revise the number.  But CaFE wouldn't let me go to that part of the system -- even to see it, let alone edit it.  I spent ten minutes clicking from one link to another trying to access where I had previously entered info about the pieces, but without success.  The only thing I could see when I clicked "review your entry" was one photo of each piece -- no dimensions, no price, no date of completion.

Finally I got tired of clicking and figured I'd just pay the damn money and be done with it. But the system now told me that one of the images I had selected was committed to another show and could not be submitted.  Decided to log out of the system, not yet having given them my credit card or completed the transaction, and log on again, hoping it might let me start from scratch.  No such luck.  I thought about it for a bit, tried to gauge how much I really wanted to be in this show, and decided it was time for a stand on principle, namely that I refused to be jacked around any more by a computer system. 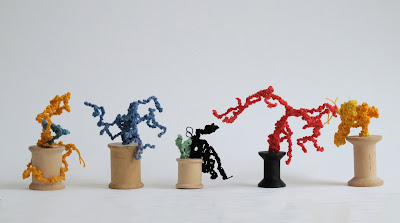 Unspooled, 2015, not entered in the Mid-States Craft Exhibition, Evansville Museum of Art, Evansville IN

I've recently heard some other horror stories about CaFE from a friend who was involved in organizing a show and got to see the output.  The system wants images that are 1920 pixels on the longest side, but "helpfully" is willing to resize the images for you if you upload something larger. Except that my friend swears the helpful system sometimes produces distorted images because it doesn't know how to get the resizing right.

I plan to let the museum know why I didn't enter the show.  I have used lots of online entry systems but haven't kept track of which ones have the features I love or hate.  I know that some systems work way better than others, and it seems that the simpler the system, the better it works.  I for one would much rather upload my images twice than have the system take them hostage in May and not give me control over them in October.

Show organizers, beware the bells and whistles of systems like CaFE that pretend to be "helpful" but are just obstinate.  Artists have better things to do than jump through 27 hoops to enter your show.