I spent the weekend at Arrowmont School of Arts and Crafts, in Gatlinburg TN, at the biennial conference of Surface Design Association.  It's the first SDA conference I've attended so I have to take it on faith that it's a greatly different model than past conferences that have been held in big-city hotels.  Instead, we met in the mountains, at a low-budget, low-amenities art/craft retreat center where we sat amid the looms and saws of artisans, an atmosphere that I found very comfortable.  The amenities may have been sparse but the food was great and the company stimulating.

I attended the conference mainly as a patriotic duty; I serve on the SDA finance committee and know that making the gathering a success was important to our fiscal well-being.  Had I read the agenda more closely I might not have come, because it was a highly focused conference about social engagement as part of an art practice.  If you've been reading my blog this summer you know that I'm feeling a bit jaded about social engagement art (click here for my story) and I was purely an observer of these efforts, not a believer.

The presenter I most enjoyed and admired was Carole Francis Lung, an art professor who maintains a second persona as Frau Fiber, self-described as a former East German garment worker and illegal immigrant.  Frau wears an attractive Eastern-bloc type of uniform and appears in character to raise awareness of injustices in textile manufacturing, and to help people learn to sew and fix their own garments instead of throwing them away.  Her motto is "Stop Shopping, Start Sewing." 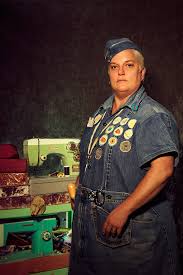 She calls this effort the Sewing Rebellion and travels around with a bicycle-cranked treadle sewing machine so she can set up shop in random neighborhoods and mend people's garments or teach them to make their own repairs.

After a wonderful presentation to the whole group, Frau (as she's familiarly known) led a breakout session in which she invited us to become "Faux Fraus," take the oath of solidarity and bring the Sewing Rebellion to our own communities.

I was sad that I was not able to swear this oath on my sewing machine as the other workshop participants did.  I subscribe to all the principles of the Sewing Rebellion in my personal life -- you should see all the mended garments I proudly wear out in public, and one look at me will convince you that I have long ago Stopped Shopping.

But this is not my crusade.  My crusade is to liberate every quilter from having to use other people's patterns and insofar as I have any energy or inclination to take on social awareness projects, that's what I'm going to work on.  Nevertheless, I am in love with Frau and her cause.  It was great to hear about her efforts, and I wish her all the success in the world.

More about other presenters in subsequent posts.