Book publishing for fun and frustration


How to kill two days and not even notice the time going by -- publish two books!

I did a Blurb book several months ago and have been on their mailing list for a lot longer than that.  But then they sent me a 50% off message and I thought it might be time to do a new book.  I had actually started uploading photos a while back, but stopped when I got sticker shock from the first Blurb project.  Monday night, with the 50% off offer running out, I decided it would be fun to have some books to dole out at Christmas. 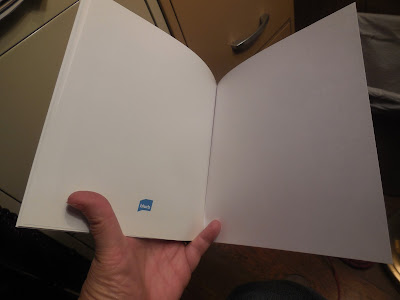 Don't know about you, but when I'm paying a buck a page, give or take, I hate to have two pages taken away from me as commercials for the producer.

And I don't believe I've ever worked with a program that has no UNDO button!  If you do something wrong, or even worse, if you just do something that the program gets pissy about, you have to painfully reconstruct what you had before -- if you remember it right.

After a couple of hours of wasted time I figured out how to specify my own layouts instead of using the (inadequate) ones on their standard list.  But it still chops me that the instant I click on one of my custom layouts, the menu instantly reverts to the standard list, so it takes me three clicks instead of one to specify the next page.  And I still haven't figured out if there's a way to specify my favorite typeface for the entire book, rather than scrolling through a list of 200 faces to find mine at least once per page.  (If I loved Arial I wouldn't be so bitchy, since it would be at the top of the list, but I love Palatino....) 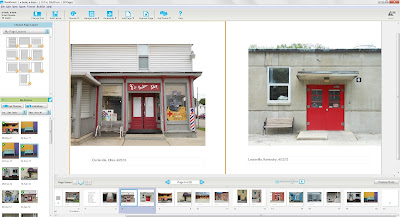 Blurb's default face for body type seems to be Georgia, which isn't a bad face at all (it's just that I love Palatino).  So why does it default to Trebuchet on the title page?  How many people who don't know typography from tomography end up with books that inexplicably come with a non-matching title page?  How many of them even recognize it?

When I finished up the book yesterday morning and hit the "send" button I was struck with one of those irrational thoughts, along the lines of "that bottle of wine was fabulous, why don't we order another?"  And sure enough, I spent the rest of the day on another one.

Book #1 is a series of photos of a door and a bench.  I've been struck with the poetic and existential implications of this combination for several years, and have gone out of my way to photograph them wherever I go.  Book #2 is a greatest-hits compilation of my favorites from the "Sign of the Week" feature on this blog.

I even set up a mechanism to sell the books, in case anybody is moved to want one.  But thanks to the clunkiness of the Blurb site, I am so far unable to figure out how anybody might access the page to buy one.  If I ever find out I'll let you know.

Well, enough crabbiness for one day.  I had a lot of fun making the books, even if not so much navigating the system to make them happen.  If Blurb sends me another coupon I might even do another one.  Meanwhile, if you know of a self-publishing site that's cheaper and less frustrating, let me in on the secret!