Who knows why you get into a funk sometimes.  In my case, it's nothing specific.  In fact, there have been some very good things going on -- the four-year-old turned five yesterday, I got work into two nice juried shows, my sister doesn't have lung cancer but ONLY a fungal infection that may take a year of medication to clear up (funny how context can make bad news into good news!). 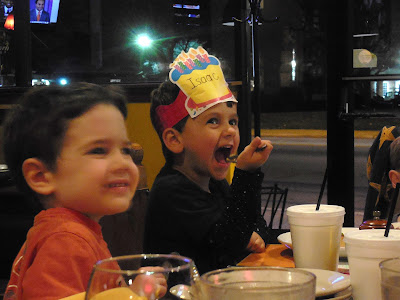 But I am in a funk.  So finally I decided there was no hope but sewing therapy.  When in doubt, go sew some things together.  You don't have to know what they're going to be, just sew them together.

After a while you will start having modules of various sizes, which you put up on the design wall.  A while later you notice that two of the modules have the same dimension, so you sew them together.  A long while later the fabric starts talking to you and saying "I want to be with him" or "I feel too dark; give me some white please."

The glory of this approach is that you don't have to make many decisions.  I had a big box of striped fabric all neatly folded and packaged after I finished my Quilt National piece a year ago.  I had noticed that there was a lot of red in that box, so I started with a lot of red strips.  Then the fabric started wanting to go dark.  And I guess I'm getting bored with sewing long strips together, so the modules started to get smaller. 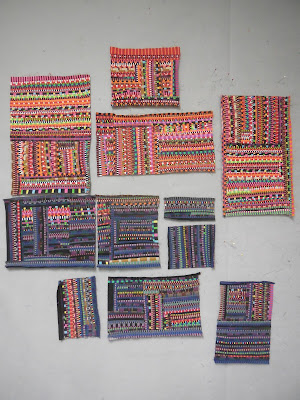 I have no idea what's going to come of this.  The funk isn't gone, but it's lurking a lot farther away than it was two weeks ago.  And it feels great to be sewing, even if you don't know what you're working on. 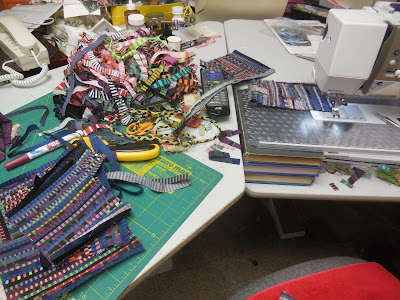 That will come.  Meanwhile, more stripes, more strips, more sewing.  The strips are mostly between 1/8 and 1/4 inch wide; I strive for narrower but sometimes they resist.  That's OK too. 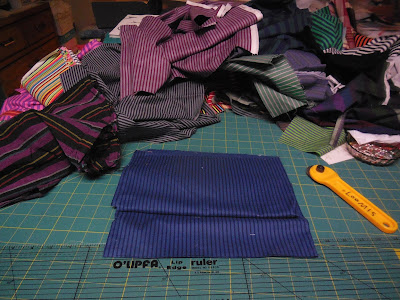 Posted by Kathleen Loomis at 7:56 AM