Last week brought frustration, over a piece that I have been working on for several months, on and off.  I made this piece specifically for the SAQA show at the Textile Museum in Washington, on the subject of migration or diaspora.  I had a great story to tell, that of my great-grandmother who made her way from Germany to Michigan in spite of many obstacles and setbacks in her life.  I wanted to combine text and images by machine-stitching onto canvas, a medium and technique I had started to explore in a couple of small pieces earlier this year.

As I worked on the piece, in between vacations, conferences and a wedding, I was pleased with many aspects of it.  I liked the way I was able to translate photos into a more abstract style of stitching -- despite my long-held disdain for representational fiber art, despite my even-longer-held inability to draw. 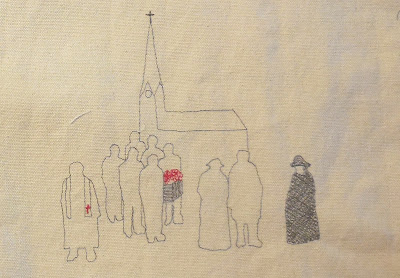 But as I reached the end of the road, and spent a day or so sinking thread ends, I started looking at all the things that I could have done better. If only I didn't have this terrible, self-defeating resistance to planning ahead, I could have made the columns of text better fill the width of the fabric.  If only I had taken better care to avoid shrinking the canvas with my heavy stitching, it would have lain flat instead of puckering.  If only I had marked a line for the top of my letters instead of just a baseline, the text would have been more uniform.  If only, if only.

I finished the piece despite my doubts.  The entry deadline was October 31.  Now on to photography.  Since the piece was long and skinny, like the Bayeux Tapestry, and there was no limit on the pixels of the submitted image, I wanted to take several shots and merge them in Photoshop into a single image.  I hauled my design wall upstairs to a better-lit environment and took many, many photos.  When I sat down to merge them in Photoshop I realized that was easier said than done; although I thought I had kept the lighting constant there were obvious differences on either side of the merge and it looked pretty crappy. 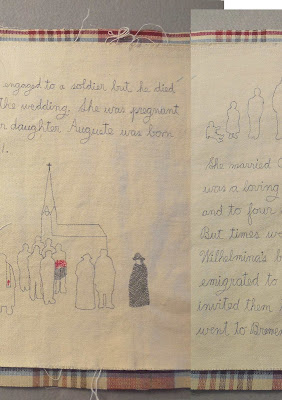 About the time I had returned to my design wall to reshoot the photos, my husband came in from his errands and realized he hadn't looked at the piece in several weeks.  He read the entire text out loud.  Then he got to the part about "Ferdinand and and his best friend" -- the typo that I had not realized was there. 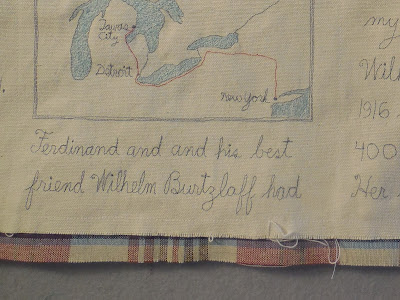 I know exactly how I made that mistake -- I must have thought the first "and" was the end of "Ferdinand" so I went on with the sentence.  How I didn't notice it in time to fix it is more of a mystery.

The piece was already quilted (because it was a SAQA show, and you had to follow the SAQA definition of a quilt) and restitching the text would have required taking a lot of the quilting out just to get the canvas under the needle.

Combined with the other frustrations this was the last straw.  I thought for about a minute about fixing it, and for another minute about leaving it in (aren't you supposed to have a deliberate mistake somewhere in your quilt so God won't think you're being too uppity?).  And then I decided to pull the plug.

In my previous life as a corporate manager I always took pride in my ability to recognize the point at which it was better to quit than to keep stumbling onward.  The point at which you couldn't meet the deadline without spending tens of thousands of dollars on a brochure that people would be unhappy with; the point at which you had to acknowledge that your employee was never going to cut the mustard.  I pulled the plug on many different things for many different reasons, and I don't believe I ever regretted doing so; as time went by, nobody remembered that we missed the deadline on Plan A, but they were always glad with what we eventually came up with for Plan B.

That's what happened last week.  I took the design wall back into the studio, rolled up the Bayeux Tapestry and put it away.  Maybe I'll come back to this project sometime and do it over again, with better planning, better execution and better proofreading.  Maybe I won't, but what I learned will stick with me for some other project.

I'm unhappy to miss out on the SAQA opportunity but in the long run this is no big deal one way or the other.  And after feeling sorry for myself through cocktail hour and dinnertime, I noticed a distinct feeling of relief as the evening wore on.  Sometimes it's better to miss the bus and wait for the next one.