The Thanksgiving holiday didn't start out too auspiciously in our house.  Yesterday afternoon the cleaning lady told me that the kitchen sink was leaking.  Sure enough, the U-shaped trap had rusted through to leave a little hole at the bottom of the curve.  I griped about how much it was going to cost to call a plumber on the holiday, or how I was going to prepare the food I needed to bring to the holiday feast without water.

She helpfully unscrewed the rusted pipe and said "just go to Home Depot and get a new trap, and screw it in, and you won't even need a plumber."  Then she got the mop, which she hadn't even put away yet after doing the floor the first time, and cleaned everything up beautifully.

In retrospect I should have said, as soon as the leak was announced, "Hold it -- I will do emergency repairs until I can have the plumber come on Friday or Saturday."  I should have then gotten my trusty roll of duct tape and wrapped the leaky pipe ten or twelve times around, and used the sink sparingly.  Heck, we didn't even have to get ready for holiday guests, just bake a pie and make some cranberry something-or-other and take it to my son's house for the dinner.

But did I do the right thing?  No, I watched her unscrew the pipe.  And I sent my husband to Home Depot for a new trap.  Which was the wrong size, so he went back again.  Then we attempted to screw in the new one.  Sparing the gory details, it didn't work.  Except that I cut my finger on the threaded end of the pipe, a sure sign of cheap crap hardware.  (When's the last time you cut your finger on any threaded object?  Right.  Because you generally own decent hardware.)

After a while we decided to give up and have a drink.  We will call the plumber on Friday and see when he can come over.  If that won't be soon, we will eat out.

So instead of being crabby, I'm going to be thankful.  The leak did not occur after a dozen guests arrived for Thanksgiving dinner, nor did it flood out a kitchen floor full of switched-on electrical appliances, books and magazines, or five-year-olds. It will not prevent me from baking a pumpkin pie, just from washing the dishes afterwards (and have you ever noticed that dirty dishes are patient, just as dirty on Monday as they were on Thursday morning?)

I'm thankful that we can afford to call a plumber, even if it's going to cost a lot more than wrestling with the cheap crap pipe from Home Depot, and that we can afford to eat out if the plumber can't come till Monday.  Thankful that the leak was in an easily accessible, totally visible pipe, not hidden inside a wall.  Thankful that we discovered the leak within minutes of it appearing, not upon returning from a month-long vacation.

Thankful that we didn't lose our power for a week after a storm, or have a tree fall on our roof. Thankful that nobody has a terminal disease, that those with serious ailments are under treatment, and that everybody can see a doctor -- and pay for it -- when they need one. 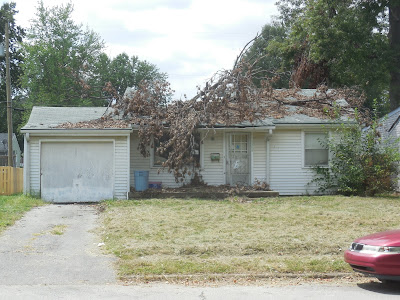 not our house, thank heavens

Thankful that we have not had a foreign terrorist attack in the United States since 2001 and that most of our fellow citizens are willing to extend a welcome to refugees from terrible wars around the globe. Thankful that despite the petty annoyances and frustrations, we still have a pretty fabulous life, one that millions of people from other countries would brave unspeakable dangers to try to achieve.

Thankful for art, both the art we look at and the art we make.   Thankful for friends, both in person and over the Internet, who make our lives so rich.  Thankful for the opportunity to connect with you all, and thankful that you honor me by reading my blog.  A happy Thanksgiving to you all.
Posted by Kathleen Loomis at 5:59 AM