It's a show to be held at the Indianapolis Museum of Art, based on the quilts of Marie Webster (1859-1956).  She was a woman ahead of her time, who made a lucrative business out of designing applique quilts and selling the patterns and quilting kits.  She also wrote the first quilting book ever: Quilts, Their Story and How to Make Them, in 1915 -- still in print, and maybe you have a copy.

You can see some of her quilts owned by the Indianapolis Museum HERE.  The rules of the show are that whatever you enter has to be inspired by a specific Webster quilt.

There was considerable conversation about this show at my fiber art retreat in the springtime, mostly along the lines of how could we stand to make a quilt based on these sweet, pale, symmetrical, old-fashioned designs.  Whereas many traditional quilters are still happy to make work in this style, the sensibilities of the art quilt world have moved a long way beyond.

Since my rule for challenges is to never make a piece that doesn't involve something already on my radar screen, I decided to pass on this show.  But then I had several conversations with  my art pal Beth Schnellenberger, who pointed out that IMA is a prestigious venue that had never before shown any contemporary quilts, and since SAQA had persuaded them with some difficulty to sponsor this show, it was important to have good work entered.  If all the entries were sweet, pale, symmetrical and old-fashioned, it would be a cold day in hell before IMA ever gave the time of day to contemporary quilters.

So I went back to the pictures and searched for a Webster quilt that somehow spoke to me -- even in a whisper.  I did identify one that I liked, or should I say, liked more than the others.  Yes, it's sweet and pale, but I thought it had more moxie than all the flower patterns.  And I liked the fact that the figures were white. 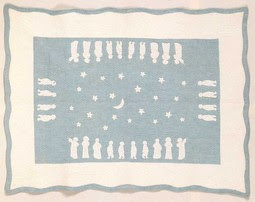 Huh?  What does that have to do with anything, you might wonder.  I'll explain more tomorrow.


Posted by Kathleen Loomis at 5:30 AM