I was in the mood to do fabric collage this week as a respite between bouts of quilting.  This one was inspired by a piece of weaving that I acquired in the grab bag at my local textile art group.  It's a fairly unfortunate piece of weaving -- a bit motheaten in the middle, not very firmly woven and scraggly where the yellow yarn was inlaid into the red.  Apparently its maker saw how things were going and cut it off the loom in despair; it has two-inch warp threads flopping off the top and ten-inch warp threads tied in an overhand knot at the bottom.

Some years ago when Baer's, our wonderful old-fashioned fabric store, went out of business, I scored several garbage bags full of upholstery and notion sample books in a grab bag.  Somebody else got to them first and cut out all the actual samples, then gave me the cardboard books, which were what I wanted in the first place.  They make fabulous supports for collage, firm enough not to buckle under wet adhesives, big enough for large compositions, rigid enough to stand up by themselves. 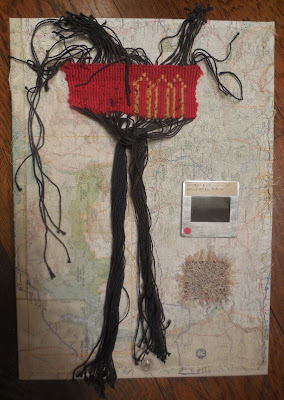 I used a sample book as the base for my collage, covered it in a map and put a layer of cheesecloth over the top to subdue the printing.  Next to the weaving I put a slide that I rescued from the wastebasket at the School of Art (they were converting their slide library to digital images).  Although I love old slides, it's always disappointing that you can't just put them into your own artwork and let viewers see the image on the slide.  But this one, mounted above the white background, is sort of visible -- prompted by the title of the slide you can make out the dark field under a pale sky. 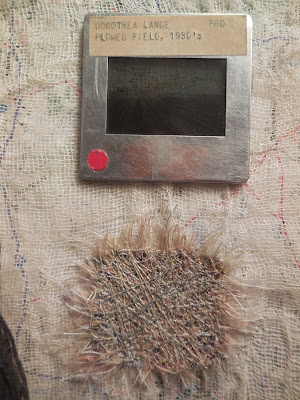 Then to rhyme with the plowed field, I added a sew-off square.

What do I like most about this collage -- that it's spare and evocative, or that every single thing in it, except for the cheesecloth, was rescued and recycled?