... is another woman's tranquility, I observed several days ago when I wrote about two quilts that I'm making for a SAQA show called "Turmoil and Tranquility."  The two started as one design wall full of piecing, but apparently decided they wanted to become two separate works.  I commented that perhaps I would enter one in the Turmoil portion of the show, and the other in the Tranquility portion.

I thought that the red bits seemed turmoiled, while the black area seemed more tranquil. 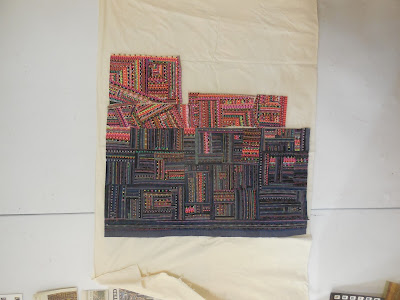 But I was surprised to read some of the comments that people left on that post.  Some people thought the red was more tranquil.

That in itself is not surprising, because everybody gets different visual vibes from abstract compositions.  But what surprised me was that many of the commenters linked their impressions to the colors rather than to the design.

One wrote:  "I generally see black more as turmoil and the red more as tranquility."   Another said: "Red has more vibrancy for me but I do not read that as turmoil necessarily.  But it's your quilt and your emotions."  A third said: "Reds make me happy, which could also read as a tumultous false gaiety.  Blacks make me reflective and calm, but could also reflect a depressive turmoil.  Depends on the mood of the viewer in the moment."

Of course I can't quarrel with any of these remarks; people's different responses are always valid for them.  But I have to confess that my own reading of the quilt, as it's going together, has very little to do with either color or the emotion it conjures up.  For me, whether a quilt is calm or not has to do primarily with how the pieces fit together.  Those with wide expanses of parallel lines, all heading in the same direction, or with regular shapes all lined up symmetrically are calm no matter what color they are.  Those with lines going in all different directions, or with irregular shapes, are busy and disturbed.  Value enters into the picture too; the lower the contrast, the calmer the impression.

That's what happened in my piece "Entropy," which is in Quilt National '15. 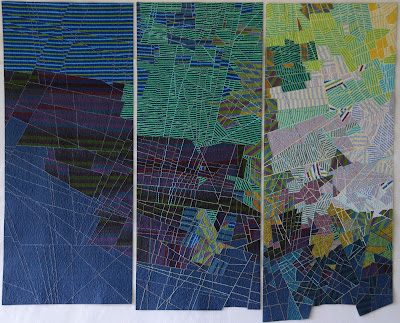 It starts out calm at the left, with all horizontal stripes, low value contrast, relatively little fracturing and only three fabrics.  It becomes more and more confused and jumbled as it moves to the right, with the stripes heading in different directions, the pieces smaller and more irregular, the colors fragmented and in smaller areas.

The fact that I used primarily blues and greens was almost incidental -- that's the colors I had on hand.  I think I could have achieved almost exactly the same effect with a palette of warm colors.

I discuss this only to make the point that everybody's brains work differently.  I think I have an emotion deficiency in my work; it's way more cerebral and conceptual than it is emotional.  (Probably it's no coincidence that I hardly ever use representational images.) 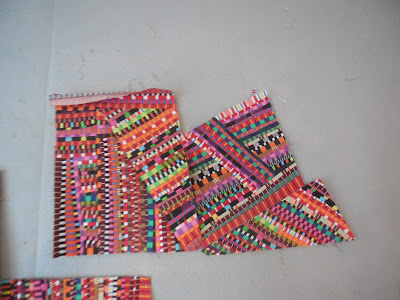 So my reading is that the red is less tranquil than the black. I say that while looking at all those diagonal cuts in the red, the smaller areas, the wider variety of colors and values, the more frequent fractures between "neighborhoods" of stripes.

(And apologies for the photo quality -- my point-and-shoot camera is obviously thrown into serious turmoil while trying to focus.)

And by the way, I now think both the quilts should be entered in the Turmoil section of the show.  Thanks to all of you who commented; you made me think about it and helped me clarify my own motives and reactions.


Posted by Kathleen Loomis at 5:15 AM