I've been puttering in the studio over the last week or so, finishing up the two "turmoil" and "tranquility" quilts but also working on some smaller projects that have been on my radar screen for a while.  Thought you might like to see one of them.

Faithful readers know that I like to make art in series, and on a regular schedule, so last year I enlisted one of my art pals for a monthly fabric collage.  We agreed on a size and format, and then each of us made up six little baggies of fabric stuff from which we would make our collages.  Or I should say, six pairs, because each month we would both be working with the same raw materials.

I've really enjoyed making the collages, although I think it took almost the whole year before I felt totally comfortable with the concept.  Now that the year is over, I think I want to stick with the program and see if I can make them less like a crafts project and more like art.

I fell behind on my schedule and didn't finish the last two collages in the year until just now.  So here's November.

What I got in the baggie was a hank of blue embroidery floss and larger piece of white fabric with printing on it (actually a reproduction of the Gutenberg Bible).  Rooting around on the big work table in my studio, I found some adorable blue-and-white fabric with farm animals printed on it.  It had obviously once been a shirt -- still had a pocket on one of the pieces -- and I have no recollection of how it got to my studio table as I never saw it before.

I tried to arrange the Bible fabric on the animals but it wasn't working.  For a couple of days I had the fabrics on display by my sewing machine, looking unhappy.  Something else was needed to tie them together.  Then on the other end of my work table I discovered a tiny piece of fabric that I had screenprinted in a Jane Dunnewold workshop, left over from a quilt I made with it.  It called out to me and said it wanted to be with the Bible and the animals.  Since the screenprinted pattern was the words to The Battle Hymn of the Republic, I decided it was a suitable playmate.

I sewed the three pieces of fabric together and embroidered over them and they looked pretty good, but there was still a lot of empty space over at the right.  My first idea was to add a sew-off square, which also looked good but didn't occupy much of the space.  So I looked in my button bag and found lots of red and blue buttons to carry out the color scheme.

And here it is: 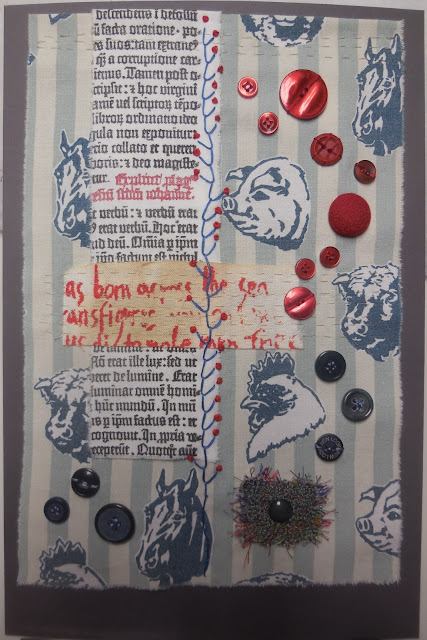 Posted by Kathleen Loomis at 6:53 AM