Cave Hill National Cemetery was decked out in flags on a beautiful sunny day, marking Veterans Day.  This cemetery has both Union and Confederate soldiers' graves.  (Kentucky remained in the Union, but there were many Confederate sympathizers among the population and several large battles fought in the state.  In fact, the historians' joke is that Kentucky did not secede until after the war was over.) 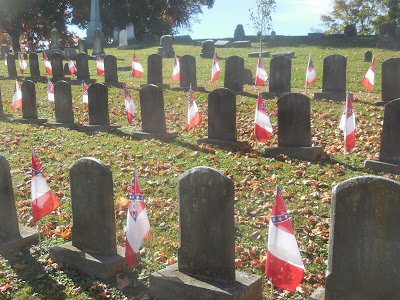 I had never been there on a flag holiday before and thus had never seen this version of the Confederate flag.  Called "The Blood-Stained Banner," it was adopted on March 4, 1865 as the third official flag of the rebel government.  This came at the very end of the war, and so few people ever got to see it in use.  But apparently this is the favored version for ceremonial purposes, at least by the people who set out the flags at Cave Hill.

Interestingly, I have visited cemeteries in South Carolina where the graves are decorated with the more commonly known Confederate battle flag, alongside the American flag. 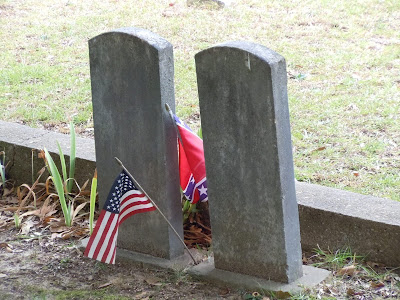 I'm not sure what to think of displaying the Confederate flag in "official" usage, nor do I know who put the flags in the national cemetery for the holiday remembrance.  I was pleased to see South Carolina remove the flag from the statehouse grounds last year and believe that it has become a symbol of racism and ignorance.  When we look back on the Civil War and count the horrible death toll -- more than all our foreign wars put together -- we do not distinguish between the sides.  Far too many people, both military and civilian, died in this needless war, and although many of them renounced their American birthright and citizenship, we did seek to heal the nation's wounds when it was all over.  Do we pick open those wounds again by posting Confederate flags on the graves?

I do not subscribe to the "Lost Cause" narrative of the Civil War, in which the South was deemed pure and noble in its endeavor.  I believe the war was fought to defend slavery, not to defend the magnificence of state's rights, and that most of the men who were conscripted into the Confederate army were pawns and victims of their leaders' greed and racism, just as were the slaves.  The Civil War was a terrible act of treason, and perhaps the winning side should have been less forgiving.  But our better angels prevailed -- thank you, Abraham Lincoln -- and we sent the losers back to their farms to get on with life.

Visiting war sites and cemeteries always brings tears to my eyes and pain to my heart.  So many times we have been forced to take up arms to defend our country.  And now and then we are conned into taking up arms for no valid reason.  In either case, people die.  You might want to seek out a national cemetery today and drop by to pay your respects.  The soldiers were told they were doing the right thing, and perhaps they were.