Time to clean up the studio.

Were there ever more depressing, discouraging words?  Strikes a klong of dark, cold dread up and down your spine, doesn't it?

Not that I really want to clean the studio, but I need to have an electrician come in and fix up my ceiling lights, all of which were installed at the same time and all of which are dying at the same time.  And to get to the most important fixture, he will have to stand on my work table, which means the top of the table will have to be visible, which means a midden of boxes and stuff will have to be removed.  So while I'm removing stuff from the work table, I might as well simultaneously be cleaning and organizing and finding stuff that can be given or thrown away.

My first thought was to get rid of my calicos.  Years ago I pulled out all those sweet 70s tiny prints that I will never use and put them in the closet.  I've given them to new quilters who wanted something to learn on without having to go to the fabric store.  I've sent them to internet friends who wanted to finish quilts begun decades ago in similar fabrics.  A brainstorm: one of my fiber art pals is in a traditional guild that makes a lot of charity quilts, so I asked her if they might want my calicos.

When she said yes, I started packing them up.  It felt good. 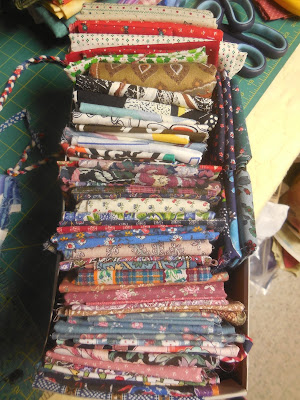 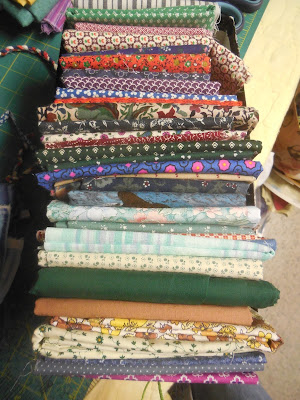 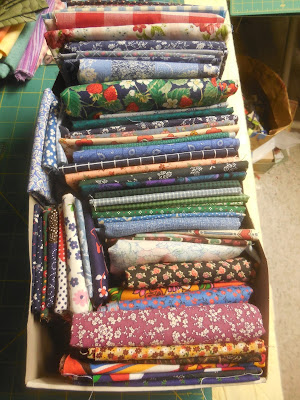 And then I had another thought -- why not also give them some of my "better" quilt fabrics?  So I started packing boxes full.

I was pleasantly surprised at how little pain I felt in parting with these fabrics -- thousands of dollars worth of beautiful cottons that had called out to me in the past and had given me lots of pleasure over the years just knowing they were there in my drawers ready for a moment in the sun.  But I realized that I would never use them, and if I knew they would be going to a good home, where people would use them and love them, I'm OK with that. 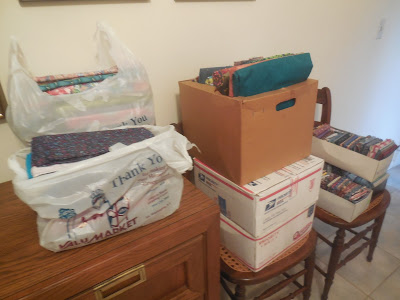 I gave my friend a trunkload of fabrics a few weeks ago, and am accumulating another pile to hand off at our textile group meeting later this week.

Of course, empty drawers aren't worth anything until you fill them with something else that had been occupying other space, such as on top of my work table.  So now I'm trying to consolidate the fabrics I still have into the partly empty drawers, and organize them more usefully for my current quilting life.  Still lots of work ahead, but seeing those boxes go out the door has been liberating.


Posted by Kathleen Loomis at 5:27 AM