Time to sew the binding to the quilt.  I use a walking foot, because the three layers of the quilt can shift under the pressure of a regular foot, even after they have been quilted together.

Place one end of the binding strip about halfway down one of the edges of the quilt, aligning it with the cut edge, but don't start sewing right at the end.  Instead, leave about six inches of strip hanging loose before you start sewing.  Sew at your predetermined seam allowance till you get almost to the corner. 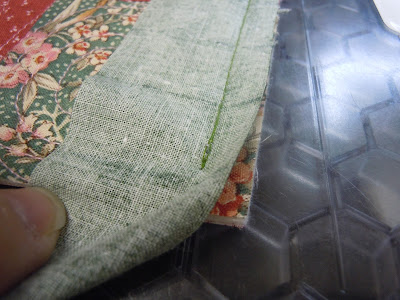 Stop your stitching exactly one seam allowance from the corner.  Make a back stitch or two to hold the strip in place.

Cut the threads and take the quilt out from the machine.  Rotate it 90 degrees counterclockwise and place it on your work table with the edge you've sewed at the top, and the new edge straight ahead of you. 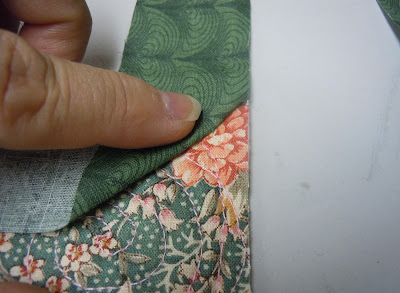 My finger hides the edge that has just been stitched.

Fold the binding strip up and away from you.  The right edge of the binding strip aligns with the cut edge of the quilt (that's why you place it right ahead of your nose, so you can eyeball the straight line).  Pull the strip taut so the diagonal fold line comes through the end of your stitching.  Press the diagonal fold with your thumbnail to help it keep its place. 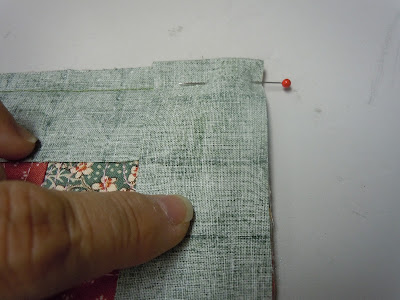 Back to the sewing machine; start sewing at the edge of the quilt and stitch the binding strip almost all the way to the next corner.  Repeat the mitered corner.  Twice more, and you'll get back to the side of the quilt that you started on.  Stop sewing about eight inches before you get to your starting point, cut the threads and take the quilt out from the machine.

You have about six inches of binding hanging loose from the beginning, plus whatever is left of the strip you have been sewing.  You now have to join those two ends at exactly the right place so the finished binding won't be either too long or too short.  You are going to sew those two ends together, which means you'll need a quarter-inch seam allowance on each end, which means your strip has to be a half-inch longer than the finished length.  So let's build in that half-inch right now. 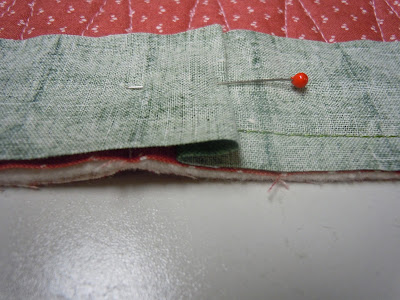 Fold back one of the strips (doesn't matter which one) right at the end of the stitched part.  Put a quarter-inch tuck in it, and pin that in place.  There's your extra half-inch, ready for when you need it. 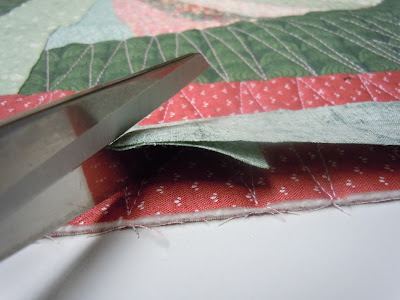 Arrange the two loose ends of the binding smoothly on top of one another and cut through both strips with one snip of the scissors.  (Don't cut the quilt top or any other fabric that might have sneaked in between the blades.)  Hold the scissors at an angle, or perpendicular, whichever way you did the other seams on the binding. 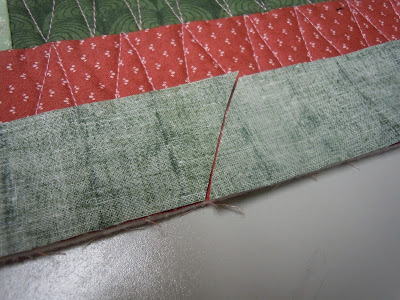 Here the two ends meet exactly at the snip line.  When you remove that pin tuck, you'll have the extra half-inch seam allowance to sew the two ends together.

But this seam is going to be tricky, because you need some extra room to maneuver, and the big quilt wants to spring loose and lie flat.  So make it give you the room you need -- pin a two- or three-inch fold into the part of the quilt that hasn't yet gotten its binding. 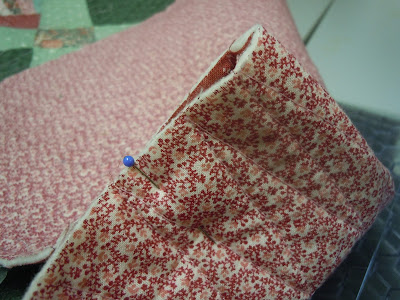 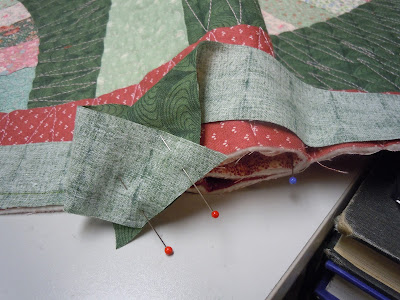 Notice the blue pin holding the big fold into the quilt, to give you slack to work with.

Pin the ends of the binding together, just as you joined the other binding strips.  Manhandle the quilt into place so you can sew the seam.  Make sure the weight of the quilt is well supported so it doesn't pull away or spring loose as you stitch. 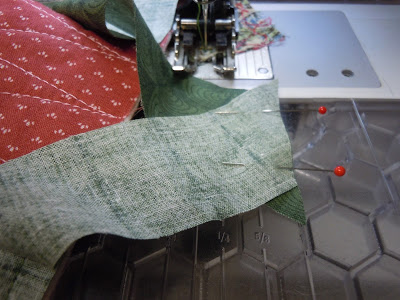 When you take the quilt out from the machine, unpin the big fold, and lay it flat, the binding should be exactly as long as you need it.  In fact, it should be just a hair shorter, because the fabric will stretch a bit and the seam will lie perfectly flat. 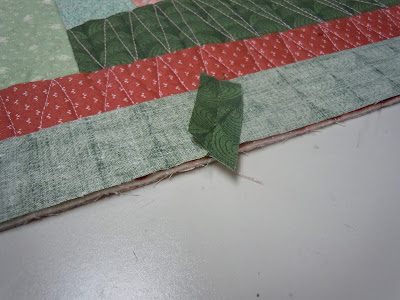 If the binding is even a bit too long, DO NOT plan to ease it in as you stitch, because you'll get an ugly bubble and bulge.  Instead, go back to the machine and restitch the seam just a hair inside the previous stitching line.  No need to take out the first seam, just sew alongside it.

With your joined binding lying perfectly flat on the edge of the quilt, go back to the machine and complete the seam, overlapping for a half-inch or so on top of the previous stitching.

Next week:  folding the binding and stitching it in place.