My paternal grandfather, who died long before I was born, was a blacksmith and also went on the road as a salesman for the De Laval Company.  Gustaf De Laval was a Swedish engineer who invented many varied devices, including a submarine and a nozzle that tapped a steam turbine at supersonic speed (invented in 1890, the nozzle is used today in rocket engines).

He also invented milking machines and cream separators, which greatly eased the backbreaking labor of dairy farming.  That's what my grandfather sold to the farmers of central Michigan in the 1920s and 1930s.  Like any good salesman, he had a bag full of giveaway crap to lay on the potential customers. 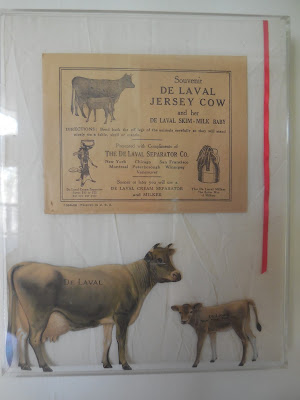 The giveaway that I remember from childhood was this set of metal cow and calf, which came in an illustrated envelope.  You took the animals out of the envelope, then carefully pulled their legs apart just enough so they could stand up.  When I was little, my grandmother's toy/junk box had at least one set of these in action, which we could play with.  But at some point in adulthood I acquired a mint-condition envelope of unbent, unhandled cattle. 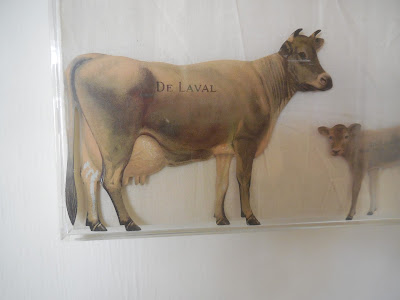 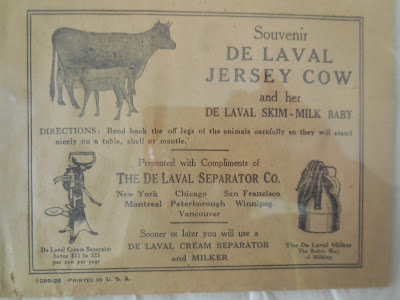 I bent the legs just enough to let them stand inside a frame, along with their envelope.

These are Jersey cows, although the ur-cow of my childhood was a Holstein.  As a barely verbal kid I was infamous among my parents' friends for knowing the different breeds of cows.  One time my godmother said "Look, Kathy, there's a cow!" And I allegedly said "That's not a cow, that's a Holstein."

Well, we spent a lot of time in those days just driving around in the country, looking at the scenery.  And there wasn't that much scenery to look at besides the cows.  So why not concentrate on the details?