I promised a friend that I would send her a link to my tutorial on mitered bindings -- except after much searching, realized that I apparently never published such a post.  So here's one for Joanne, and anybody else who has the urge...

Before you start sewing on a binding, you need to establish your specifications: how wide to cut your binding strip, and how far from the edge to stitch it on.  Traditionally, bindings are about a quarter-inch wide, but you may want a wider one to make a more assertive edge.  If you want a wider binding, just substitute "one-half inch" wherever you read "one-quarter inch" in these directions.

The old-fashioned quilt police will tell you that the only proper way to make a binding is to cut it on the bias and use it double, so two layers of fabric will protect the edge of the quilt.  I don't do either of those two things.  It's true that when quilts are in daily use, washed regularly, and especially if they're pulled up against a whiskery chin every night, the edges will get abraded and thinned over time.  So two layers of fabric are a good idea, as is a bias cut, so the abrasion doesn't take out an entire thread along the edge and pop the binding open.  But if you're planning on using your quilt lightly, or hanging it on the wall, there's no need for the extra fabric and trouble.  I cut my bindings on the cross grain of the fabric -- perpendicular to the selvage -- for a bit of extra give.

Before you cut your bindings, do a sample.  You can make the sample on your actual quilt (use long stitches, so you can rip them out easily), or if you have a scrap of quilted fabric around -- maybe some that you trimmed off the quilt when you squared it up -- you can use that.

Your binding needs to be cut four times the width of your finished binding, plus a bit for ease -- for a quarter-inch binding you'll want it at least 1 1/4 inches wide.  But for the sample, cut a strip 1 1/2 inches wide, about four inches long.  Place the binding strip on top of your quilt, right sides together.  Align the edge of the binding strip with the edge of the quilt, then sew it on with a quarter-inch seam allowance.

The folded edge of the binding should cover your stitching line, but just a hair.  If it's too wide, and the binding extends an eighth-inch or more past the stitching line, you'll want to cut your strips a bit narrower than 1 1/2 inches.  But if it's not wide enough, and the folded edge doesn't cover the stitching, you'll want to cut the strips a bit wider.  Cut a new sample strip, sew it on and check it.  Then write down the width you want so you don't have to do test samples on your next quilt.

Why do I suggest you make a sample rather than just tell you how wide to cut?  Because your "quarter-inch seam" may not be the same as my "quarter-inch seam."  And that's perfectly OK.  For instance, my  bindings are always a bit wider than a quarter inch, because I like to use the edge of my walking foot as a gauge.  And of course, you might want a wider binding because you like the look.  So figure out your preferred seam spacing, and then work from there to figure out how wide to cut your binding strip. 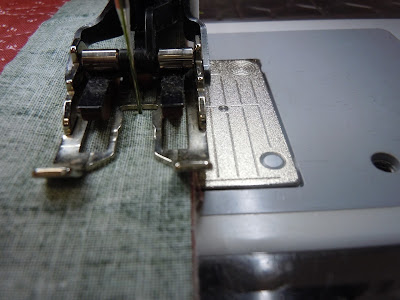 It's easier for me to gauge my seam width by the little rectangle cut out of the top of my walking foot than to use the grid marks on the presser foot plate (because they're hidden).  So my bindings end up closer to 3/8 inch than 1/4 inch.

The important thing is to cut bindings that work for you.  You want the folded-over edges of the binding to reach down to the edge of the quilt so you have four layers of binding everywhere, you want the binding to be pulled taut around the edge.  That way your bindings will be smooth, firm and fully-packed, good enough for the quilt police.

Now cut the binding strips on the cross-grain (from selvage to selvage).  You'll probably need several strips to reach around the quilt.  You can sew the strips together into one long piece either with straight or with diagonal seams.

To join on the diagonal: 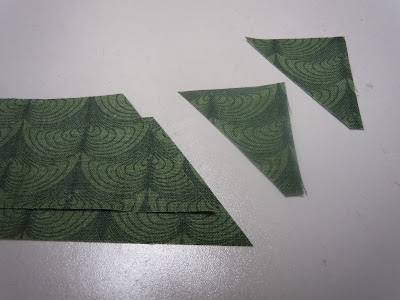 Cut through two strips at once so you have the same angle.  Align the cut edges, but shift them so the seamline begins where the cut edges cross. 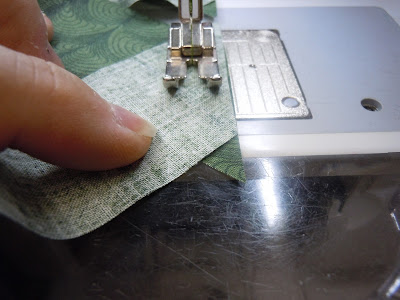 Press the seams and the entire binding strip.  I like to press the seams open rather than to one side, because that means a flatter binding, but it doesn't really matter.  Trim the points so they don't extend beyond the edges of the strip. 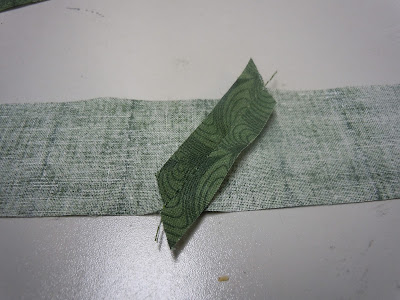 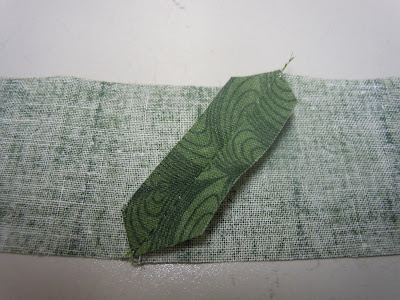 Friday: how to sew the binding on.