We moved into our house in 1986 and had to buy boatloads of stuff to fix up and furnish the place.  On one of our numerous trips to the mall, my teenage son and I were walking through J.C. Penney's and saw that microwaves were on sale.  Although this was not on my shopping list, or in my budget, Matt insisted that we buy one -- a relatively new appliance that we had not previously owned.  I think we paid $89 for it. 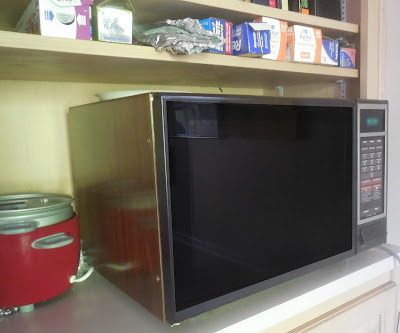 In an age of planned obsolescence, perhaps this particular appliance sneaked by quality control.  Surely they didn't expect that an $89 microwave would still be going strong into its fourth decade!

Maybe I shouldn't say going "strong," because it seems to have lost some of its oomph as it aged.  In other people's kitchens, you zap a cup of tea for one minute and it's nice and hot; in my kitchen it takes two minutes and 20 seconds.  But what's a minute or two among friends?  The microwave soldiers on, never faltering.  It's the easiest of all our appliances to reset the clock after a power failure.  We've never even had to replace the light bulb.