According to the statement on the wall, the Thread Lines show at Kentucky Museum of Art and Craft "brings together those pioneers who -- challenging entrenched modernist hierarchies -- first unraveled the distinction between textile and art with a new wave of contemporary practitioners who have inherited and expanded upon their groundbreaking gestures."  I'm not sure what that means, although two points for using "unraveled."  I didn't detect anything that specifically expanded upon the work of the pioneers, and in fact the specific approaches of the pioneers -- weaving and patchwork -- were barely used by the younger artists in the show.

I had to quarrel with the curatorial decision that included not one, not two but three artists whose work consisted of pattern charts -- two for sweaters, one for weaving (but you could probably knit a sweater from it if you wanted to). 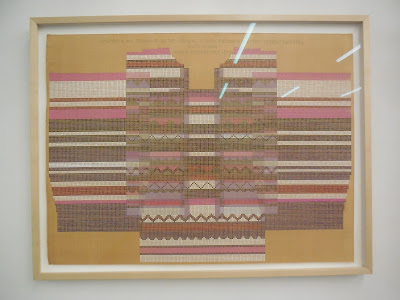 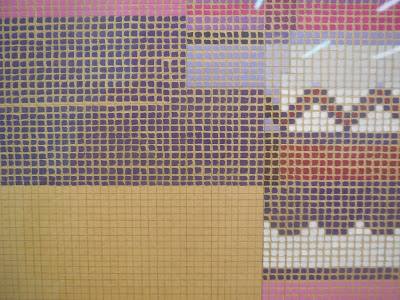 Ellen Lesperance, December 12, 1983: Standing Beside the Communal Campfire, She Reads Aloud from the Front Page News: "Women at War! 25,000 in Greenham Base Demo" (detail below)

This artist's gimmick is to find a photo of somebody wearing a sweater at a famous demonstration from the past -- this one was against nuclear weapons -- and chart the pattern, then paint it in gouache. 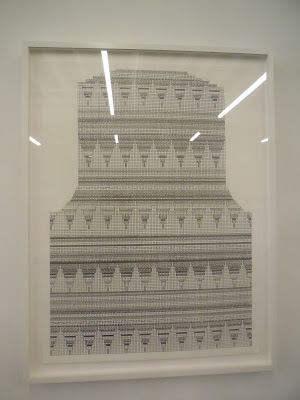 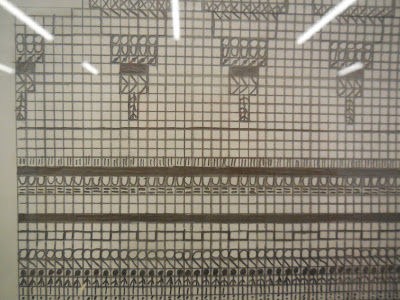 Here the pattern is rendered in graphite rather than in paint, but same difference.  If this is fiber art, which I'm not entirely sure of, then you might think one example would be plenty in a show with only 15 artists.

If these two sweater-chart artists are twins, then here's their big sister.  This artist drew charts of weaving patterns, photographed the charts and printed them out, then digitized the pattern and had an embroidery machine stitch over the printout. 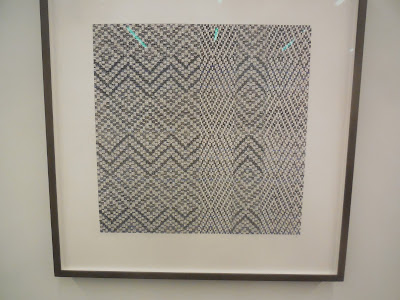 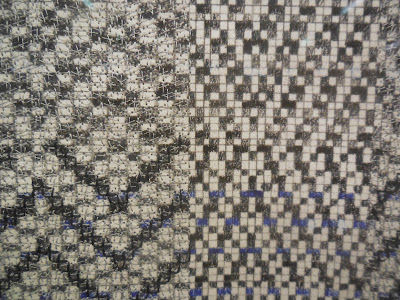 At least this one had some actual stitching in it.  But all three left me cold, cold, cold.

Next week: some work in the show that I liked!