It's Memorial Day, and I'm never one to let holidays go by without a bit of theme-reminiscence.  So that brings me to World War II, during which my father served in the Army in Eastern France and into Western Germany.  He didn't bring back a lot of war souvenirs -- no sawed-off Nazi ears, no liberated Kandinskys -- but somehow I have had these little mementos in my jewelry box for decades. 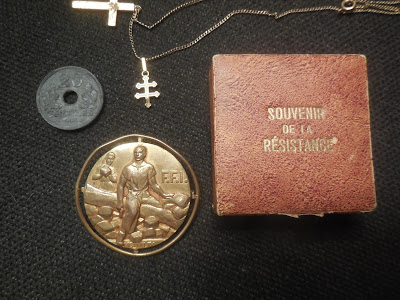 On top, a tiny gold Cross of Lorraine, the two-barred cross that has been the symbol of that province since the 13th century.  During WWII it was the symbol of the French Resistance.  It's so small -- barely a half-inch tall, that I thought it would disappear if worn by itself, so since childhood I've worn it on the same chain as a larger cross.

On the right, a somewhat battered leatherette jewel box, which reads "Souvenir de la Résistance."  The medallion, which is fitted with a pin back, shows a guy sitting on a stone wall, or maybe climbing over it, with a woman behind holding a big rock.  Maybe they're building a barricade to derail a German locomotive.  The initials "F.F.I." stand for Forces Françaises de l'Intérieur (French Forces of the Interior) aka the Resistance, known as "fifis."

The medallion is dated 1944.  By the time Dad got to Lorraine, right around New Year's 44-45, the allies had liberated most of France, the fifis were incorporated into the regular army, and life had returned sufficiently to normal that entrepreneurs could manufacture resistance souvenirs.

On the left is a 20 centime coin, made out of some kind of metalloid material with hardly any weight whatsoever.  It's black with age, or maybe it was black to begin with, dated 1945.  It has a faint diagonal stripe across the face where for years it was apparently scotch-taped to a card, but I've always kept it in the same box with the medallion,

Although Dad's unit made it many miles into Germany before the war ended, he found himself on V-E Day in Paris!  Maybe that's where he bought these souvenirs, knowing that it was finally time to celebrate.