A new exhibit at Kentucky Museum of Art and Craft shows the work of 15 artists in and about fiber and textile processes.  It includes some very big names in the fiber art world (Sheila Hicks, Lenore Tawney) and in the plain-old-art world (Louise Bourgeois) as well as many artists I had not heard of.  Organized by The Drawing Center museum in New York City, and now on the road, the show will be at KMAC through August 6.

I can't say I was overly impressed.  It had the slightly gee-whiz vibe that so often sounds when people from the plain-old-art world contemplate works made from fiber or with fiber techniques.  How strange but also nice that people make art from cloth using needles!  And if you squint your eyes a bit you can even think of it as Real Art!

I know I'm being snarky, but as both practitioner and aficionada of art from fiber, I found little to get excited about.

Sheila Hicks, one of the patron saints of fiber art, was represented by four "minims," the name she gave to thousands of tiny weavings, five or six inches wide, done on a portable loom that she took with her as she traveled.  She used these little works as a sketchbook to record ideas and materials. 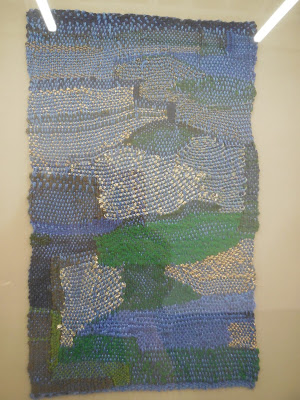 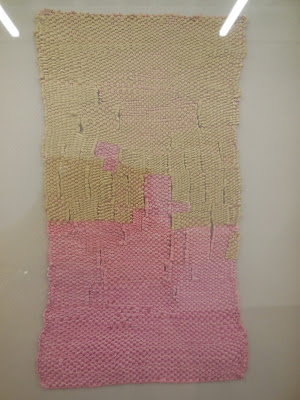 
What can you say about these fragments?  Perhaps that sketchbooks, doodles and studies aren't always museum-worthy.  If these pieces had been woven by Kathy Klutz in a workshop at John C. Campbell Folk School you know for sure they wouldn't be hanging in this show.

Similarly, there are four Louise Bourgeois pieces made from old napkins, towels and striped fabric.  Two are clever riffs on her signature spider motif, cutting the striped fabric into wedges and assembling them into spiderwebs.  The curator's notes point out that Bourgeois made these pieces in her old age, raiding her lifelong stash of old textiles.

You don't expect artists in their 90s to have the perfect technical skills of their youth (as a girl, Bourgeois did textile restoration in her family business, so you know she could really sew), but you do expect them to make up for a shaky hand or failing sight with a mature artistic vision.  Think Matisse's paper cutouts or Monet's waterlilies.  Maybe I'm being too critical but this patchwork doesn't say anything to me. 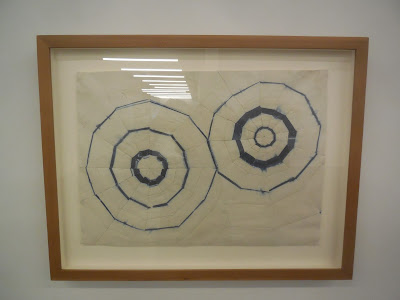 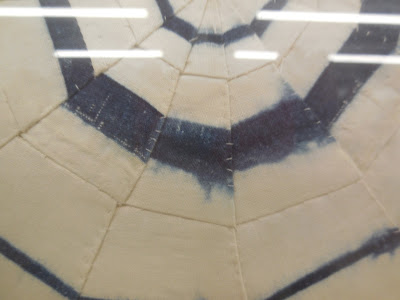 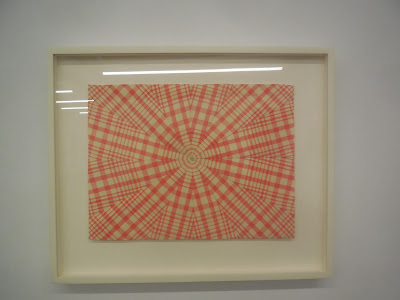 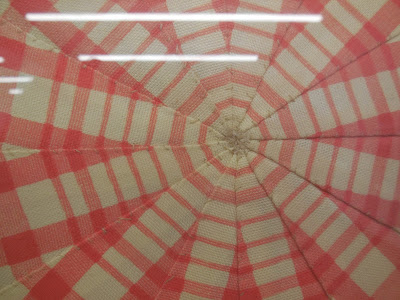 Here's the Lenore Tawney piece, from 1974.  I wasn't following fiber art in those days, but from what I have reconstructed in my reading, this was a quintessential example of those early glory days when fiber briefly was on the verge of acceptance in the mainstream art world, and was all the rage in corporate office buildings to soften the hard edges of marble and concrete.

In that time, weaving was the pinnacle of fiber art (quilts or knitting sure didn't get a foot in the door) and doing interesting things with your weaving was so avant. 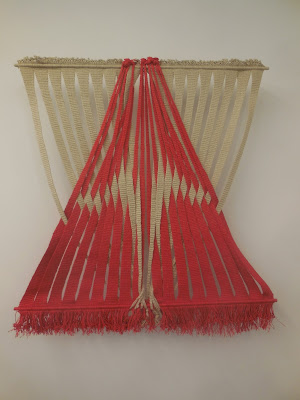 Lenore Tawney, Union of Water and Fire (detail below) 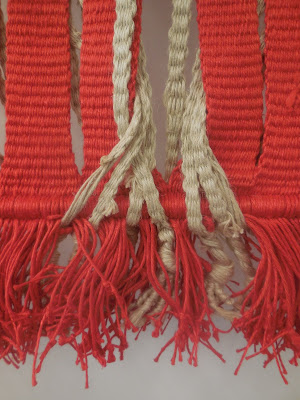 You can't help but admire how it broke ground in its day, but now it looks dated and ordinary.  The point of this show, according to the wall sign, is to honor the "groundbreaking gestures" of the fiber art pioneers, they didn't do a very good job of choosing work that has aged well.

Well, enough crabbiness for one day.  I'll show you work by the younger generation in my next post.