I am a lover of cold weather, but on so many of my foreign travels I bring a heat wave with me.  We just about melted in Greece and Turkey in 2008; when we spent a month in Germany in 2010 it was so hot across Northern Europe that 11,000 people died in Moscow and many of us wanted to die in Berlin; when I went to Antarctica with a suitcase full of heavy-duty winter gear it was 52 degrees one afternoon.

The day before we left for the Baltic I checked weather.com to get the forecasts for every city on our route, and didn't find a single one with a high of more than 60 degrees.  Ha ha.  Perhaps once it got below 60 degrees; our jackets and scarves stayed in the suitcases and we wished for shorts.  It was 87 degrees in St. Petersburg, and that is not a city known for its air conditioning.  Fortunately the big palaces were built with plenty of insulation and stayed tolerably warm-but-not-to-die.  But it was kind of unpleasant in the restaurant and as we strolled through the streets and parks .

We were unimpressed by the time we spent standing on line, not just to get in (three separate lines at the Hermitage)  but to get your passport checked on the way off the ship and to get it checked again on the way back to the ship. 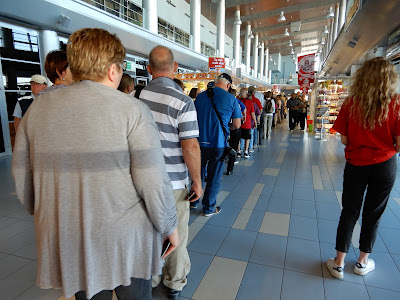 There were crowds everywhere.  Fortunately none of us had things to check in the cloakrooms. 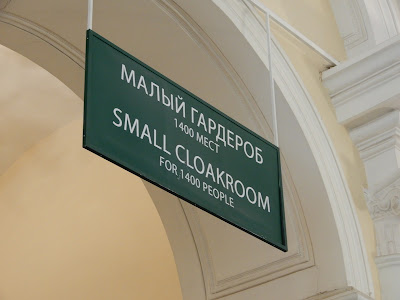 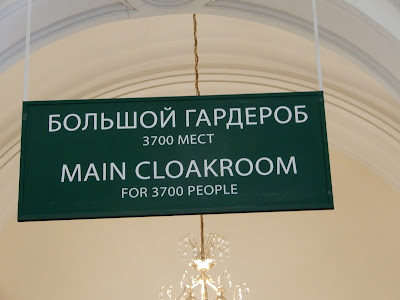 In practically every room of the museums you would see a dour lady sitting on a chair in the corner.  Occasionally one would rise and shout at somebody who committed an infraction, but mostly they just sat there looking glum. 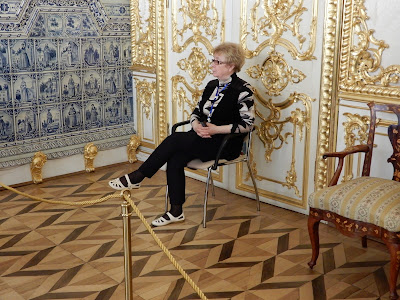 As we waited on line to get back on the ship we noticed that there were two glum ladies sitting together; at least they got to wear semi-sharp uniforms and had somebody to talk to. 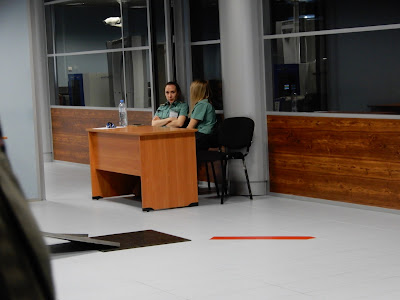