Two years ago I was feeling frissons of dismay about what was happening in the country as the presidential election approached.  I made three flag quilts to express different nuances of that dismay.  And I will confess that I was pissed off that none of them was juried into Quilt National, because I thought they were far stronger works than the quilts I have had accepted into that show in the past, and because I thought that artists who spoke out against the sorry state of American democracy should be given as wide latitude as possible to have their work shown.

Today I'm feeling dismay again -- or perhaps I should say yet.  It was brought very close to home last week when a guy with a gun attempted to enter a black church, and when nobody answered his knock on the door, went down the street to a grocery store and murdered two black shoppers.  This is a grocery store, a few miles down the road from my house, where I have shopped many times.  A couple of days later, another guy with a gun shot up a synagogue in Pittsburgh, in a neighborhood where I have walked and shopped and eaten and driven through.

What dismays me today?  Let me count the ways --

The fact that we have almost as many guns in this country as people (except a huge proportion of those guns are owned by a relatively small proportion of people).  The fact that so few politicians have the guts to stand up to the NRA, although the great majority of people in the U.S. want stronger gun regulation.  The fact that our president throws gasoline on the flames of white male resentment every time he opens his mouth, ranting against immigrants, Muslims, people of color, women, anybody with the slightest deviation from standard sexual identity.  The fact that he trashes and insults our allies, the democracies of the world, while expressing his love for dictators and bullies such as Kim, Erdogan, Duterte, Putin.  The fact that the Republican party goes along with every outrageous word out of the president's mouth.  The fact that so many avowed Christians have decided that they love a thrice-married, perpetually lying, self-confessed sexual assaulter because they think the ends justify the means and this is the way to ban abortion.


My parents, along with their entire families from the day they immigrated, were Republicans.  They were decent people, as were most of the people in that party.  The Republican party used to pride itself on its commitment to principles.  When Nixon hit the fan, it was because his fellow Republicans, dismayed at the revelation that he had lied and obstructed justice, announced they could not support him.

I do not see that commitment to principles any more in the Republican party.  Instead I see previously decent people who have decided to sit down with the devil, perhaps uneasily but boy, are their butts firmly attached to their chairs!  They have sold their souls to the NRA, to the big money PACs, to the pharmaceutical and gambling and oil lobbyists.  They have pinned their election strategies on keeping as many potential Democratic voters as possible from registering and voting.

My only hope is that we're having an election next week.  And although our constitutional system is deliberately rigged to favor the voters in small states and dilute the votes of those in large states -- in other words, most of the people in the country -- I still have hope that decency will prevail.  If we miss this chance, we may not have another. 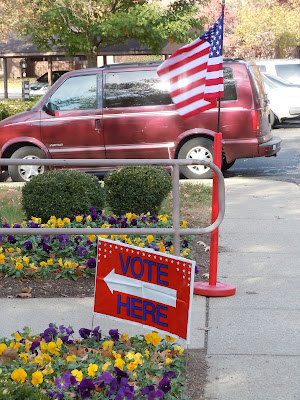