Last month I had the pleasure of a day at the Museum of Modern Art in New York, and discovered an artist I had not previously known -- Geta Brătescu, born in 1926 in Romania, who worked in fiber.  The museum had three of her works, collaged and machine-stitched onto heavy canvas, in an exhibit called "The Long Run." 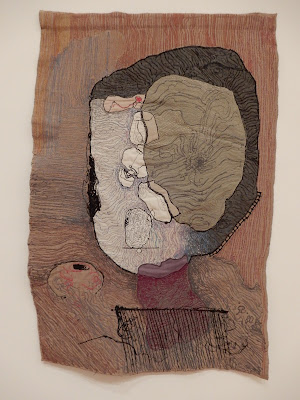 The conceit of this exhibition was that artists with long careers keep on being innovative and creative (duh!), and included works from their later years.  Some of the artists in the exhibit are well known -- Louise Bourgeois, Ellsworth Kelly, Georgia O'Keeffe, Andy Warhol, Philip Guston -- while others were new to me, including Brătescu. 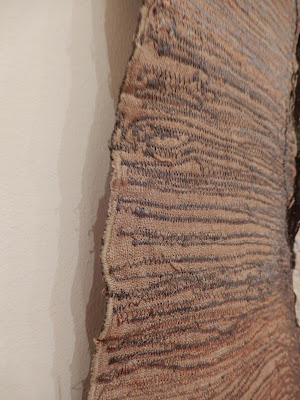 Each of her pieces was about 30 inches tall, rippled from the heavy stitching, with the edges roughly zigzagged.  The wall tags identified the medium as "drawing with sewing machine on textile." 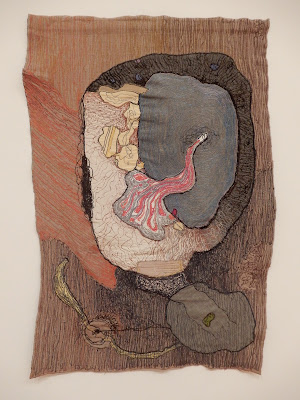 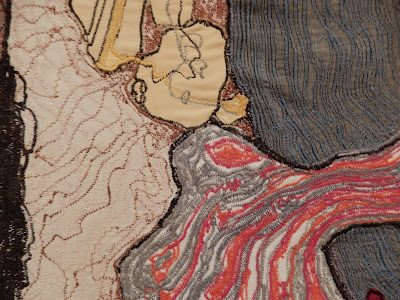 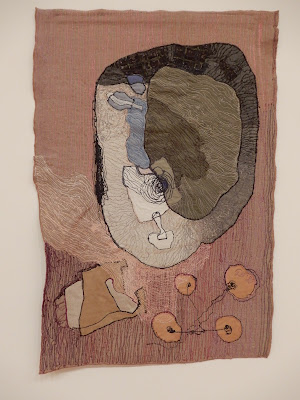 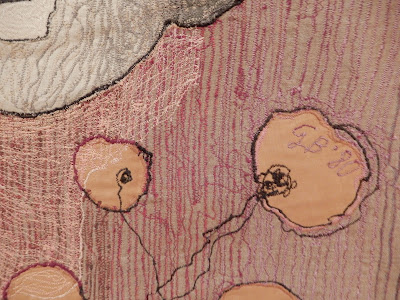 When I got home I tried to understand the titles -- "hypostasis" (the preferred spelling) in philosopher-talk means "substance, essence or underlying reality".  In medical and science talk it refers to blood settling in the lower part of the body or sediment settling to the bottom of a fluid.  In genetics it refers to the action of one gene being suppressed by the action of another gene.

Apply all of these to Medea, Euripides' tragic heroine who kills her own children to spite the husband who cruelly abandoned her, and maybe we're seeing the revenge course through her system and sink, overpowering her motherly love.  Or maybe something else...

As you might imagine, I loved these works, took pictures and looked forward to sharing them with you.  Finally last night I got home, ready to write some blog posts after a long time on the road.  But in this morning's newspaper was an obituary of Geta Brătescu, who died at age 92 in Bucharest, the week after I saw her work.

She worked in many styles and mediums, in graphic design, collage, drawing, photography and film; turned to textiles only in the 1980s.  After the breakup of the Russian bloc, she was discovered in the West, had some high-profile shows and represented Romania at the Venice Biennale last year.

In some ways Brătescu's work reminds me of that of Ana Lupas, another Romanian fiber artist whom I discovered a couple of years ago -- both of them working with modest materials and basic sewing stitches, but with a lyrical quality and powerful presence.  Indeed, when I googled Lupas just now to see whether she is still alive (I think yes) I found that she and Brătescu had at least one joint exhibit, about ten years ago.

I'm happy to have discovered this work, but unhappy to find out, so soon, that this artist is gone.