Getting ready for the show


I've told you that I'm getting ready for my solo show at PYRO Gallery, opening a week from today.  The topic is my daily art, which I've been doing since 2001.  So unlike many artists, who as their show approaches are chained to the studio, wildly sewing or painting or whatever to make new work, I don't have to make anything new.  But I do have to figure out how to display all the stuff I have made over almost two decades.

Yesterday my wonderful friend Vickie came over to help me get set.  Our first task was to cover foamcore boards with felt to make a background for collages that will be pinned up.  I've written before about my frustration in ordering foamcore boards that arrived with all the corners crushed in, but fortunately the felt concealed much of the crush, and we decided it was good enough for government work. 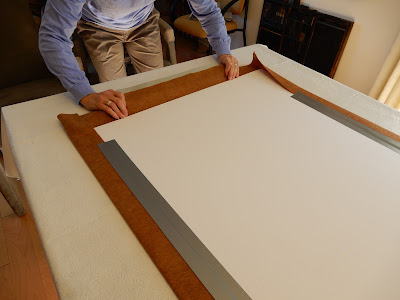 We had to decide which collages would go on the board -- I had spent a lot of time narrowing the choices down, but when it came to the last decisions, I outsourced to Vickie and my husband.  They chose which five to lose, or sorted poems into yes and no piles.   Ordinarily I'm a control freak but as this show reaches its completion I guess I'm tired, and happy to relinquish ownership of the final cut. 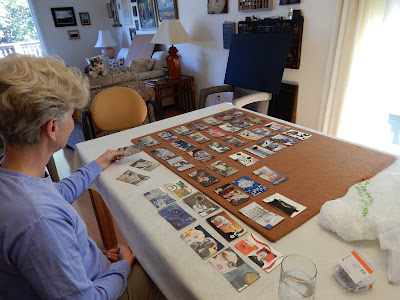 Then we arranged and rearranged the cards on the boards, both by subject matter and by color.  Finally ended up with four boards occupying every horizontal surface in the living room. 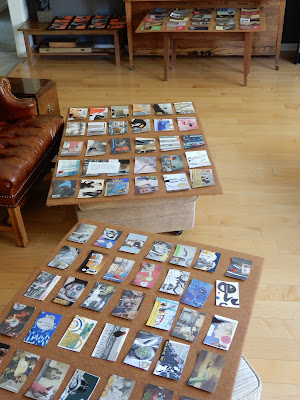 After lunch we moved on to photos.  I had made prints of 80 of my favorite daily photos, but only ordered 50 mat sets.  I will have room to display only about 25 photos, but thought I would get about 40 matted and put the rest in a flat bin for immediate purchase.

I was disappointed to find that some of the photos, bright enough when seen on a computer, looked drab as prints.  But no harm done -- the prints cost only 39 cents each.  We put a bunch in a pile for Photoshopping and reprinting sometime in the future.

We had to hinge the cut side of the mat to the back board, and then tape the prints inside.  Since I had foresightedly bought two rolls of archival framer's tape, we could each work separately and crank out a big pile of beautifully matted prints. 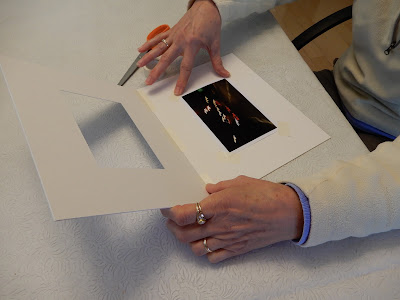 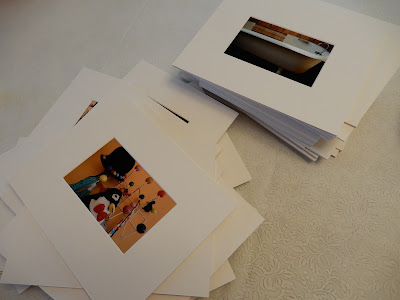 I realized that I hadn't bought enough of the tiny T-pins to get all the collages pinned to the boards, so I let Vickie go home.  I'll have to finish that part of the task on my own -- certainly before the next baby visit to our living room.

I know I could have done these things by myself if I had to, but it was such a joy and relief to have a helper, if only to be able to talk through the decisions that were already 90 percent made, and to give somebody else a chance to say "OMG don't put THAT collage up on the wall!"  I've always believed that everybody needs an editor, and Vickie was my safety net.  As well as my dear friend, especially after today.

Posted by Kathleen Loomis at 5:56 AM