Faithful readers know that I have been struggling with something to make for our gallery theme show called "finding home."  I made a little stitched house, but that seemed too cutesy.  Then I made some stitched pyramids but the first one seemed to be not stitched enough, and when I made two more I failed to allow for distortion of the fabric under the stitches, with the end result that the pyramids were falling over on their faces. 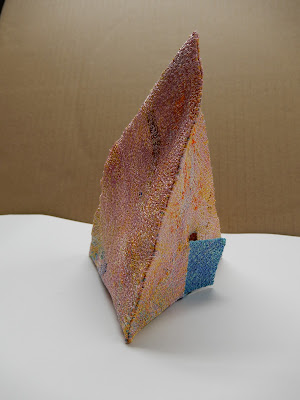 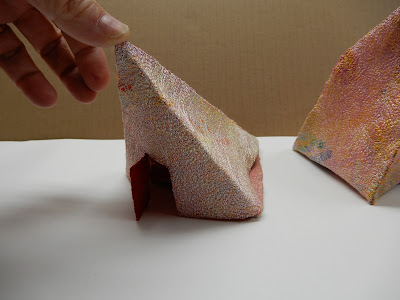 Then a brainstorm: instead of 3-D houses I would make 2-D houses and mount them on a thick black canvas.  Two years ago I had made some little hand-stitched pieces that I mounted that way, and they were all bought within days of going up on the wall in the gallery.  Maybe I could achieve a similar effect with machine stitching.  My plan was to make three pieces -- all with pink houses, but with different sky colors.  Maybe I would call them morning, noon and night. 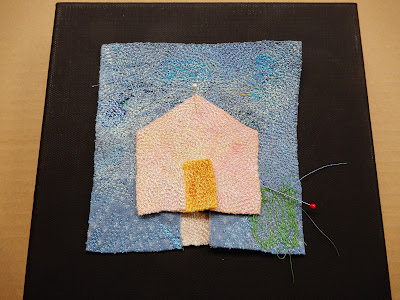 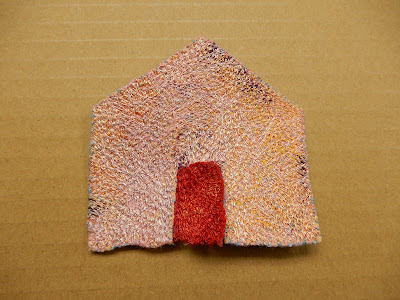 I got two houses and one background stitched and showed them to two groups of art pals, who were generally underwhelmed.

I was getting discouraged.  The art has to be on the wall two weeks from today and while I could easily produce three of them in time for the show to begin, I didn't feel great about it.  Usually I am not bothered by negative critical comments from others, perhaps because I don't often show work in process to others.  But for some reason this show has me jinxed, and I have lost my self-confidence.

Do not give me any suggestions, please; my problem now is too many ideas and too little focus.  In the next posts I'll tell you what I've decided (I think) to do for the show.

Posted by Kathleen Loomis at 6:04 PM