My gallery is having an all-member theme show in April and I have been trying to figure out what to make.  The theme is "home" and the organizer had lots of philosophical thoughts about how we are supposed to contemplate the true meaning of "home."  I find myself turning off when asked to contemplate the true meaning of anything, so I am just trying to come up with something that will kinda sorta have to do with "home" and not be too cutesy or precious.

So what to do.  My first thought was to make some more refugee quilt people and stick them under the interstate bridge to represent the homeless people that we have way too many of.  But I realized that I would have to build an interstate bridge for them to live under, and that would get pretty involved, since I am not a woodworker.  I also realized that while I am personally concerned about homeless people, I didn't particularly want this to become a subject for my art.  (I am personally concerned about a lot of things that I don't want to become subjects for my art, and I don't feel a bit guilty about that.  Your art practice has to be a lot more selective and focused than your personal political agenda.)

My second thought was to riff on the stitched pyramids that I made a couple of years ago.  These were so heavily stitched that they took on structural integrity and were able to stand by themselves, a theme that I have been exploring in various ways.  After I finished the five pyramids below, I thought I would continue with different shapes and thought I might equip them with doors or awnings or other architectural features.  But I had never gotten around to this. 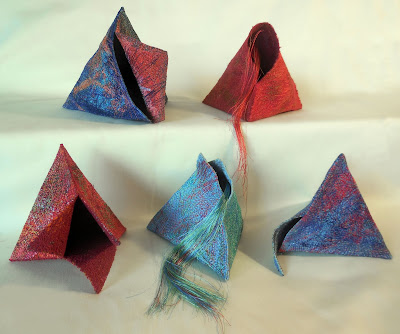 I have written many times about how I will respond to theme challenges only by making something that was already on my to-do list, and adding doors to pyramids qualified.  So I made a little house with a little door that opened.

Here's a picture of the heavily stitched house, complete with door: 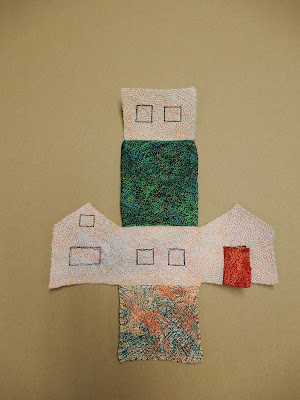 Although I had made a carefully measured template for the house, I was unhappily surprised at how some of the segments got distorted with the heavy stitching.  In particular, the left-hand house side developed a droop at the lower left, and the door ended up bigger than the opening it was cut from.  The sides of the roof also weren't exactly the same length as the sides of the house they had to be connected to.

When I stitched the pyramids together it made absolutely no difference whether the sides ended up exactly the same length.  I was happy to leave half of the seam unstitched.  But that approach wouldn't do for a house. 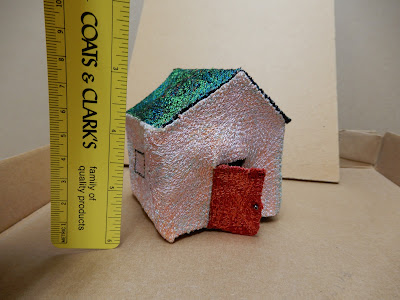 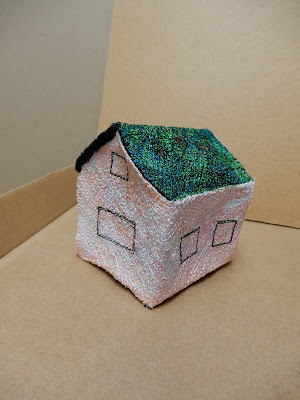 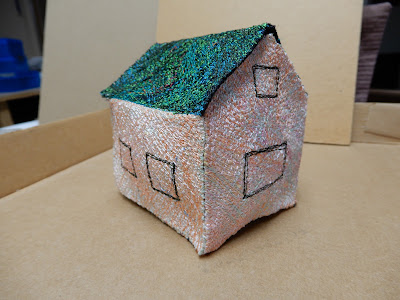 I still don't know whether this piece is too cutesy for the gallery, or too glib and superficial, or too lacking in artistic substance.  But at least it's finished.