All those rejected homes 1


I've complained at length over the last several months about how hard it was for me to settle on what to make for the "home" show at PYRO Gallery.  Now that the show has opened, I decided it was time to revisit some of the rejected ideas -- many of which had considerable work put into them before I pulled the plug -- and see if they could be remodeled.

First was a project that I rejected early on, without even writing about it in the blog -- a postage stamp quilt with little houses.  I thought I would whip out this quilt far more efficiently than I have done many postage stamp quilts by choosing a stiffer bottom layer, thus enabling construction without a bothersome middle.  There was some gray felt lying on the work table and I thought that might be a great support. Then I could simply layer a background and a house on top, and get right on to the stitching.

I cut out a bunch of 2-inch squares from the felt and started composing little houses.  It didn't take very long before I realized what a dumb idea the felt was.  It was so squishy that it oozed ahead of the needle as the presser foot squeezed down.  I had all those squares cut out, and a whole lot of bits and pieces to make houses, and didn't want to throw them out, so I sewed them up anyway.  But this turned into a small quilt rather than a much larger one as I had envisioned. 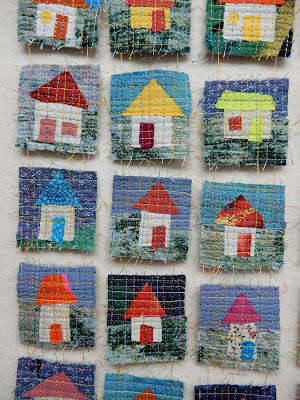 While I was sewing them up anyway I realized that not only was felt a bad choice for the bottom layer, the little houses were turning out way too cutesy.  So after I finished this first (and last) batch of postage stamp pieces, I stuck the quilt in a corner and went on to my next idea.

But now I have gone back to the cutesy little houses and finished the small quilt.

It's still too cutesy and I'm glad I abandoned the idea for the home show, but there is a place in the world for cutesy things and maybe this guy will find an appropriate moment and venue in the future. Maybe a gift for a child?  At least he's finished.