Last week I got off on a tangent telling you about Enid Yandell, an excellent sculptor from Louisville who had a hard way to go a century ago because of her gender.  Now I'll get back to the show that got me onto this subject in the first place.  Several women sculptors in the region have banded together in a group called "Enid" and to commemorate Enid's 150th birthday, they have a small show at 21C Museum Hotel in Louisville.

My dear friend and art pal Bette Levy had two large pieces in the show, both of them dramatic combinations of ancient farm equipment and new crocheted pieces to complement them. 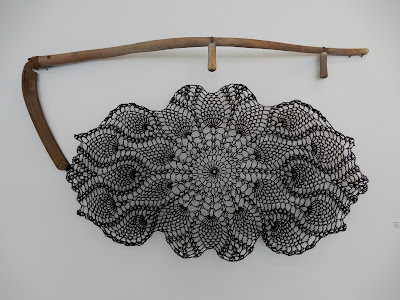 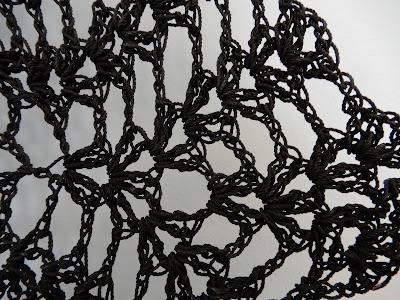 Bette finds doily patterns in old needlework books, executes them huge (this one is probably five feet across) and then stiffens them so they retain their shape when mounted on the wall. 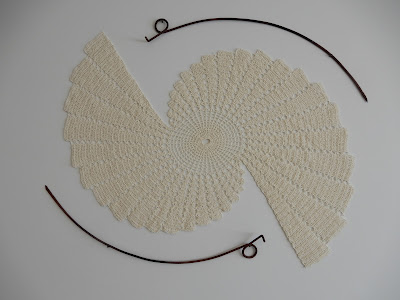 Here the rusty metal pieces are tines from an old hay rake, which would have been pulled behind a tractor. 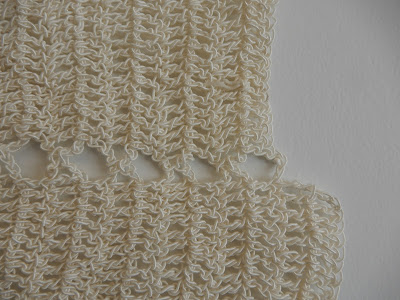 I sometimes find long curator explanations at museums to be pretentious and artspeaky, but the remarks about Bette's work struck me as worth reading.  The sign said:

"Farm and domestic labor are the focus of Levy's series that combines doilies crocheted in historic patterns with aged farm tools, previously used to reap sustenance from the land, but long since abandoned for larger, mechanized production.  The scale of the crocheted doilies is enlarged to visually challenge the dominance of the tools, subverting the traditional gender division of labor and power, creating a more balanced pairing."

The exhibit continues at 21C Museum Hotel, 700 West Main Street in Louisville, through October.  If you've never visited a 21C, you should -- a combination of hotel, restaurant and world-class gallery, welcoming walk-in visitors as well as paying guests.

Posted by Kathleen Loomis at 4:02 PM