The mailman brought a surprise: the catalog for Forced to Flee, the SAQA exhibit about refugees.  The designer had a good idea in getting rid of the gray background in my photo, so the refugee quilt people are floating on the white page. 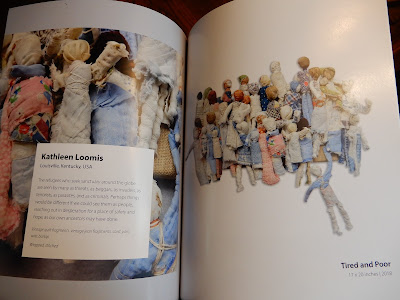 It's a classy catalog and I found the juror's statement interesting. She said she "found the attempts at abstraction less successful" than the figurative images that dominate the exhibit.

That's understandable, because so much of the world's attention to the various refugee crises stems from the dramatic images that photographers have captured of people in distress. Think of the little girl crying as her mother is frisked by U.S. Border Patrol agents, of the dead five-year-old on a beach in Turkey, of a crowded raft almost engulfed by waves on the Mediterranean.  Indeed, the latter two images were translated into quilts for the SAQA exhibit.

I've always thought of myself as the queen of abstraction, having made all of two figurative quilts in my whole life, but I too went figurative for this exhibit.  And it's probably good that so many of us did; when you think of a problem like refugees as an abstraction, it's easy to be dismissive and cruel.  When you think of it as people, perhaps you get closer to a solution.

Tiger Woods has always been our favorite golfer.  We got to watch in person on the pivotal hole when he won the 2000 PGA tournament in Louisville, and in 2012 I noted each of his tournament victories in my daily stitching.  So to mark his Masters victory on Sunday, here's my favorite miniature of the week: 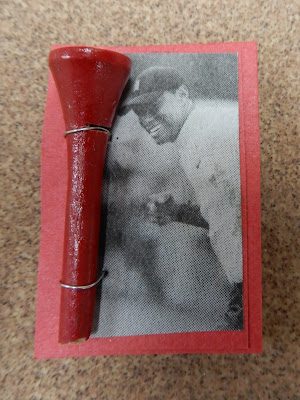 Posted by Kathleen Loomis at 11:29 PM